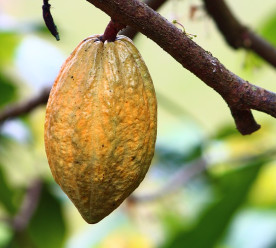 Green & Black’s, which pioneered organic Fairtrade chocolate, is launching its first UK product without a Fairtrade or organic label. The new Velvet Edition dark chocolate bars will instead carry the Cocoa Life certification, set up by Mondelez International, formerly Kraft Foods and owner of Green & Black’s since acquiring Cadbury’s in 2010. Mondelez calls Cocoa Life “a holistic, cocoa sustainability programme in partnership with Fairtrade”, which will “ensure Mondelez remain an accountable partner for farmers”. Unlike all other Green & Black’s bars, Cocoa Life is not organic as organic beans are not available at this scale, explained Glenn Caton, Northern Europe president of Mondelez. The Cocoa Life branding is expected to replace all Fairtrade logo across Cadbury’s entire chocolate range in the UK and Ireland, including Flake, Twirl and Wispa, by 2019. Although not traded according to the Fairtrade Standards of certification, Fairtrade insisted the farmers will not lose out. (BBC)

Over 1,000 defective cars for lease allegedly bought by Uber for Singapore

Uber is facing new questions after the company leased cars prone to fires in Singapore. The ride-hailing company borrowed capital from Goldman Sachs Group and other banks to purchase more than 1,000 defective Honda Motor vehicles from importers, according to the Wall Street Journal. Uber managers in Singapore were aware that Honda had recalled the Vezel models over concerns that an electrical part could overheat and catch fire. One car reportedly burst into flames in January. Uber said it worked with Singapore officials and took “swift action to fix the problem” within Lion City Rentals, Uber’s affiliate which rents out vehicles for its drivers in Singapore, where the cost of owning a car is among the highest in the world. Uber said it had hired three in-house experts to ensure it was responsive to safety recalls. (Bloomberg; Guardian)

Increasing investor considerations of climate risks are driving the world’s largest companies to commit to reducing their impact on global forests, says a new report by the Global Canopy Program. According to the analysis of resolutions put forward by members of the Ceres Investor Network between 2011 and 2017, proposals have increasingly addressed deforestation risks, including the production of palm oil, soya, timber, and cattle, and have featured more details in terms of forest issues and policy implementation process. It also showed that 52% of the 23 proposals successfully filled led to some form of commitment from the company. All resolutions were filled in the U.S. and targeted high profile companies such as DuPont, Mondelez, Starbucks and Target. More than two thirds of the companies targeted are ranked by Global Canopy’s ‘Forest 500’ project as being among the 250 most influential companies with the power to end tropical deforestation. (Sutainable Brands)

Tesla in online drive to mentor Australian schoolchildren on sustainability

Tesla is moving into the Australian school system as Australia and New Zealand country director Kurt Schlosser has announced it would join other major corporations in backing an online learning platform being rolled out to students around the country. The ‘Day of STEM’ program is run by US company LifeJourney and directly links mentors from industry with students online to make them get a real-life appreciation of what happens in the business world. The platform, backed by Westpac, Australia Post, Telstra, AMP, Twitter, Lockheed Martin, BAE Systems and SAS, also runs programs for mentoring women on cyber­security and to give students. Tesla’s LifeJourney is named the “sustainability architect” and will feature Mr Schlosser as its mentor. He hopes the program will enable students, educators and families to “test drive their future’’ in sustainability and provide practical applications of the growing importance of the concept. It is the first time the company has linked with a formal education program in Australia. (Australian Business Review)*

London to double size of electric car charging network in 2018

London’s network of on-street electric vehicle (EV) charge points will almost double to around 1,500 by the end of 2018, the Mayor’s Office has confirmed. Thanks to a new £4.5 million investment granted by the Office for Low Emission Vehicles, 25 boroughs will receive up to £300,000 each to expand the availability of charge points. The funding adds on to plans of a new network of 150 fast charge points to support the roll out of a new fleet of plug-in taxis. London Mayor Sadiq Khan said they had “a bold ambition to make London’s transport system zero emission by 2050”. The move follows the UK government’s recent announcement to support EVs and ban the sale of internal combustion engine cars and vans from 2040. However, Khan argued the proposals were not sufficiently addressing London’s air pollution and urged Ministers to introduce a new diesel scrappage scheme. (Business Green)