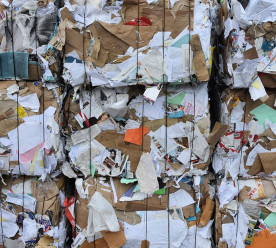 China has notified the World Trade Organization (WTO) that it would stop accepting shipments of rubbish such as waste plastic and paper as part of a campaign against “foreign garbage”. The import ban, which will enter into force by the end of 2017, will also cover slag from steelmaking, and many kinds of waste wool, ash, cotton and yarn. China is a major importer of waste – last year, it imported 7.3 million tonnes of waste plastics, valued at $3.7 billion, accounting for 56% of world imports. Apart from Hong Kong, the biggest sources of that plastic waste were Japan and the United States, which are also the main sources of scrap paper going to China. China’s speedy industrial development has seen it struggling to regulate waste disposal, leading to toxic waterways and cities blanketed in smog. (Reuters)

The UN has launched a toolkit to help firms move towards gender-balanced procurement, as research shows just 1% of spend by governments and large corporates goes to women-owned businesses. The kit, produced by UN Women, includes practical advice for businesses looking to diversify their supply chains to support women. Deputy executive director at UN Women said the toolkit supports its “women’s empowerment principles”, a set of measures to help companies promote equality through the way they do business. It suggests a definition and eligibility criteria firms should adopt to avoid tokenism and fraud. The research by WEConnect, which uncovered the 1% statistic, argued that a number of forces, including the fact that women make up half the workforce and are involved in 70% of consumer decisions, mean this figure has to rise. (Supply Chain)

Target has published its 2016 Corporate Social Responsibility Report, which highlights the progress made with regard to its sustainability goals and aligns the next set of goals with the SDGs. In its report, Target provides a checklist which demonstrates how organizations can measure impact both positive and negative in respect to the UN Sustainable Development Goals (SDGs). It has made fast work of meeting and exceeding past goals, surpassing its goals on increasing organic food and sustainable packaging designs, reduce water consumption in its stores and divert retail waste. Target has also announced one of the most comprehensive chemical strategies in the retail industry, focusing on driving transparency and ensuring proactive chemical management and innovation across every product the company sells, throughout business operations. (Triple Pundit)

The European Union is considering the introduction of new labels to classify green financial products in an attempt to boost investment in the sector as it seeks to take the lead in the fight against climate change. The move would be part of a wider plan to promote EU public and private spending on clean energy and other green industries. The European Commission estimates that Europe will need 180 billion euros ($207 billion) in additional investment every year in the next two decades if it wants to achieve its goal of curbing global warming. The lack of commonly agreed labels  green financial products has so far hampered market development, according to a report by an EU expert group on sustainable finance. Clearer classification is expected to boost environment-friendly markets and help curb greenwashing. (Reuters)

Sustainable resource use could unlock £4.4bn to electrical sector

A new report by UK waste body WRAP found that more circular business models within the electricals sector could prevent up to one million tonnes of waste and save 14 million tonnes in CO2 emissions each year. It estimates the industry could benefit by up to £4.4bn from using resources more sustainably and improving on reuse and consumer take-back schemes. WRAP found as many as half of consumers were willing to buy used products from a reputable retailer, while 83% of households are interested in retailer take-back schemes for older appliances. It also found more people would be willing to return their old products for recycling or reuse if their concerns over personal data were addressed by the industry, presenting a great opportunity for brands and retailers to address these issues through circular business models. (Business Green)