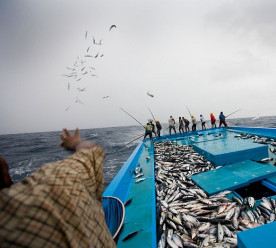 Greenpeace and the world’s largest tuna company, Thai Union, have put their long-running conflict to rest with the announcement of a comprehensive package of reforms and commitments to reduce the company’s environmental and social impacts. The new partnership signals that Thai Union is serious about making good on its promises and is building on the recent launch of the Tuna 2020 Traceability Declaration, which Thai Union signed. The new commitments follow its sustainability strategy SeaChange and include efforts to support best practice fisheries, improve other fisheries and reduce illegal and unethical practices in its supply chains. Greenpeace and Thai Union have agreed to meet every 6 months to assess the company’s progress and implementation. At the end of 2018, an independent third-party will review progress to-date on the commitments. (Sustainable Brands)

Annual greenhouse gas emissions rose more quickly last year than they have in nearly three decades, the National Oceanic and Atmospheric Administration reported. Scientists attributed this increase in part to a strong El Niño weather pattern. Meanwhile the Annual Greenhouse Gas Index shows that global emissions increased by 40% between 1990 and 2016, a significant measure of man’s influence on the climate. However, NOAA’s announcement this year does not directly link human activity to emissions. The report comes as the Trump administration dismantles many of former President Barack Obama’s climate change policies and scrubs most mentions of global warming from government websites. Neither the director of NOAA’s global monitoring division nor NOAA research chemist who worked on the index, would discuss the agency’s decision not to highlight human activity. (New York Times)

Biofuels made from genuine waste such as green garden waste, farm straw and waste paper can help reduce carbon emissions and should be encouraged, says a new report commissioned by the UK government. It also highlights that biofuels made from food crops can produce higher emissions than fossil fuels and that their use should be capped. Clear rules and regulations are needed to make sure biofuels made from waste are sustainable and do not create perverse incentives to generate more waste or divert it from some other use. Although biofuels are often described as carbon neutral, they entail significant greenhouse gas emissions – from the production of fertiliser, nitrous oxide release from soils and so on – but can also result in clearing forests to create more farmland. The UK alone produces 16 million tonnes of waste a year that could be turned into biofuels. (New Scientist; BBC)

Bottling company Coca-Cola European Partners (CCEP) has unveiled a new packaging strategy for its Great Britain operations based on collaborative partnerships to reform the national recycling systems and boost recycled content to 50%. The new strategy focuses on packaging innovation, consumer behaviour change and “championing the reform” of the UK recycling system. To achieve this, the company will partner with Clean Tech, which operates Europe’s largest plastic bottle reprocessing facility in Lincolnshire, and work with the UK Government to improve the current recycling system. Later this month, CCEP will launch a multi-million-pound communications campaign on recycling, expected to reach 35 million British residents by the end of 2017. Across the UK, only 70% and 57% of cans and plastic bottles are recycled respectively, despite being 100% recyclable. (edie)

UK supermarket Waitrose has announced that all 46 of its own-label tea products will now be Fairtrade-certified. The commitment comes after Sainsbury’s faced protests last week for backing away from Fairtrade to launch its in-house Fairly Traded Scheme, which could be eventually applied to other products. Waitrose said the wider rollout of the Fairtrade mark could ensure that farmers benefitted from “good working conditions, a fair deal and funds to spend on their local community”. It also stressed that farmers could choose how to spend the premium, a point of contention in Sainsbury’s new scheme. Sainsbury’s will require farmers to develop strategic action plans and present them to the UK retailer in order to receive “tailored advice, data and practical support”. (The Grocer)