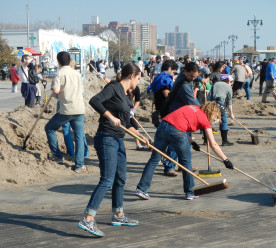 In a recent survey of employee volunteers conducted by Deloitte, fewer than 40% of respondents said they saw volunteer activities as a way to gain valuable job skills. The results appear to suggest that employees in today’s marketplace don’t realise that their volunteer activities can lead to career opportunities and valuable on-the-job training. Nonetheless, eighty-nine percent of respondents said they believed companies that organize and support volunteer opportunities offer a better working environment than those who don’t. Seventy percent said that volunteer initiatives are more likely to boost employee morale than other activities like company-organised happy hours. Previous surveys, conducted both by Deloitte and by other firms, have confirmed that employees feel volunteer programs help them engage in the workplace, the teams they work with and the company’s personal values and brand. (Triple Pundit)

Greenpeace has released a new IT product guide ranking tech giants according to iFixit’s ‘repairability’ score. The ranking system considers the time required to repair the product, the device’s upgradability and modularity, as well as the availability of spare parts and repair manuals. Fairphone, Dell and HP scored top spots, as the only companies that make spare parts and repair manuals available to the public. Nearly 70 percent of all of the devices tested had batteries that were impossible or difficult to replace. To discourage user repair, many devices require the use of non-standard tools to work with proprietary screws and other parts. Additionally, very few electronics manufacturers provide users with information about how to fix their products. Apple, Samsung and Microsoft’s products were identified as some of the least east to repair and upgrade. (Sustainable Brands)

Crops covered with neonicotinoid seed coatings to kill pests can harm honeybees and wild bees, according to the results of a pan-European research study, prompting renewed calls for a permanent ban on bee-harming insecticides. The Centre for Ecology & Hydrology‘s large-scale study assessed the impact of neonicotinoids on honeybees and wild bees – crucial pillars of the world’s ecosystem and food chain – across three European countries. It found that exposure to treated crops reduced winter hibernation and migration levels, a key measure of year-to-year population variability of honeybee colonies. Neonicotinoid seed coatings were temporarily banned by the European Union in 2013 due to concerns over the impact on bee health. But Greenpeace UK‘s chief scientist Dr Doug Parr said the latest research marks a “watershed moment” in the fight to protect bees, and called on political leaders to back an even stronger EU ban on bee-harming pesticides. (Business Green)

The widows of four men executed by Nigeria’s military regime in 1995 are suing oil giant Shell for alleged complicity in a military crackdown. The civil case, filed in The Hague in the Netherlands, argues that the company provided support to the army, which ultimately led to the executions. Shell has repeatedly denied the claims, stating it “did not collude with the authorities to suppress community unrest and in no way encouraged or advocated any act of violence in Nigeria.” Ken Saro-Wiwa, the best known of the nine men executed, led protests against the environmental damage caused by oil production in the Niger Delta. This latest case against Royal Dutch Shell has been filed by four of the wives of the men – political activists known as the Ogoni nine – and is supported by Amnesty International. The women are seeking an apology and unspecified compensation. (BBC)

French bank BNP Paribas has been accused of complicity in the 1994 Rwandan genocide, with three civil society organisations lodging a complaint in the French courts on Thursday. The groups claimed that the bank was used to transfer $1.3 million from the Rwandan national bank to a Swiss account belonging to a South African arms dealer in June 1994, one month after the UN had implemented an arms embargo. The alleged transfer of funds by BNP from the Rwandan national bank to the arms dealer, according to the complaint, allowed for 80 tonnes of weapons to be sold to Hutu colonel Théoneste Bagosora. Mr Bagosora was a key player in the genocide, according to the UN’s International Criminal Tribunal for Rwanda, which found him guilty of genocide and other crimes in 2008. A spokesperson for BNP Paribas said: “We became aware of the complaint through media. At the moment, we do not have enough information regarding the complaint to be able to comment on it.” (Financial Times*)