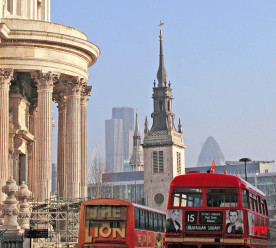 Allied Irish Banks Plc (AIB), has been fined more than 2 million euros by the Irish central bank over compliance failures in relation to anti-money laundering and terrorist financing laws. The central bank reprimanded AIB for six breaches of the law, which the lender has admitted to, the regulator said in an emailed statement Tuesday. AIB said separately that the settlement related to issues occurring between July 2010 and July 2014. During that period, AIB failed to “report suspicious transactions without delay” to police and tax authorities and didn’t conduct due diligence on customers whose accounts predated the first Irish anti-money laundering laws in 1995, the central bank said. It also found breaches regarding AIB’s policies and procedures concerning anti-money laundering and anti-terror financing in “a number of areas,” including its trade finance business. (Bloomberg)

With government in retreat, companies step up on emissions

Nearly half of the Fortune 500 biggest companies in the United States have now set targets to shrink their carbon footprints, according to a report published Tuesday by environmental organizations that monitor corporate emissions pledges. Twenty-five more companies adopted climate targets over the last two years, the groups said. Almost two dozen companies, including Google, Walmart and Bank of America, have pledged to power their operations with 100 percent renewable energy, with varying deadlines, compared with just a handful in 2015. Google’s data centers worldwide will run entirely on renewable energy by the end of this year, the technology giant announced in December. Companies like Walmart and Google, increasingly attuned to customer concerns about climate change, have led the effort to set targets. Procter & Gamble has also committed to reducing its greenhouse emissions by 30 percent by 2020, compared with 2010 levels. The companies’ disclosure of their greenhouse gas emissions remains voluntary, and difficult to verify independently — a problem that has also dogged countries’ pledges under the Paris climate accord. (New York Times)

A new business support programme called Advance London was launched at City Hall by the London Waste and Recycling Board (LWARB) on Tuesday (25th April) to help SMEs in London adopt and scale-up resource-efficient business models. The scheme, which is a partnership between the Mayor of London and London’s Boroughs, forms part of a £50m three-year programme and is committed to achieve a 65% recycling rate by 2030 and become a zero-carbon city by 2050. It will provide free practical help and advice to assist SMEs in identifying circular economy opportunities. A team of skilled business advisors will deliver a series of events, workshops and one-to-one business support, and will also support existing circular enterprises to overcome any barriers to growth and improve their competitiveness. An improved circular economy model in London is estimated to have the potential to create 40,000 new jobs by 2030 as well as lowering unemployment and providing financial incentives. (Edie)

Earlier this year, Ford announced a new multi-million-dollar pilot project in partnership with Transport for London (TfL) to reduce emissions and improve air quality in London through the use of plug-in hybrid (PHEV) transit custom vans that run solely on electric power. The automaker has now revealed the five fleets that will be participating in the program. The Ford Transit Custom plug-in hybrid van pilot program is part of a $4.5 billion Ford investment along with the introduction of 13 new electric vehicles globally over the next five years to give customers greater capability, productivity and performance. The project is designed to explore how lower-emission plug-in hybrid electric vans could support cleaner air targets, while boosting productivity for operators in urban conditions. Meanwhile, three Ford factories in the US have introduced an expansive closed-loop recycling system and Ford is now saving enough recycled high-strength military-grade aluminum alloy — approximately five million pounds a week — to build 51 commercial jetliners or more than 37,000 new F-Series truck bodies a month.. (Sustainable Brands)

Adidas is set to launch three new editions of its popular UltraBoost shoe next month, made using plastic debris found in the ocean. In a further bid to end pollution, the German sportswear brand has joined forces with environmental initiative Parley for the Ocean for the second time with the Ultraboost, Ultraboost X, and Ultraboost. Available in-store and online starting May 10th, the trainers will reuse 11 plastic bottles per pair and feature laces, heel lining and sock liner covers made from other recycled materials. Helping to achieve Adidas’ goal of creating one million pairs of UltraBoost sneakers using ocean plastic this year, Parley for the Oceans are helping to turn waste into thread which is used in building the running shoes. “We are one of the very few companies that integrate sustainability into their business model, which becomes most visible in the fact that we take sustainability to the product level” said Kasper Rorsted, Adidas CEO. (Independent)