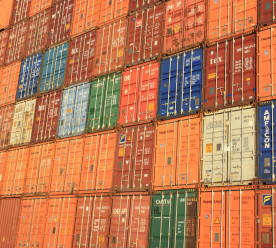 The head of the world’s biggest supplier of concrete, cement and aggregates LafargeHolcim, Eric Olsen, is stepping down from the role following an investigation into the company’s activities in Syria. The firm recently found that managers of a factory in Syria had paid local armed groups in order to stay open.  In his statement, Mr Olsen said his decision was “driven by my conviction that it will contribute to addressing strong tensions that have recently arisen around the Syria case”. In March, the group explained that its own internal investigation had discovered that the company’s managers at its Jalabiya plant in northern Syria had, until 2014, paid protection money to various local militias as the political and military situation deteriorated during the country’s civil war. The company is now looking for a new chief executive and Mr Hess will act as interim chief executive for the time being. (BBC)

A Scottish marine engineer has been praised for his bravery and awarded $1 million by the US courts for whistle-blowing on one of the world’s biggest cruise operators, which was illegally pumping thousands of gallons of oily waste into the sea. Christopher Keays, from Glasgow, was 27 and working as the third assistant engineer on the Caribbean Princess in 2013 when he discovered a so-called “magic pipe” that was being used to discharge thousands of gallons of the waste into British waters. Princess Cruises, part of the giant US-based Carnival Corporation, has been handed a landmark $40 million (£31 million) fine after admitting polluting the sea and trying to cover it up. As well as Mr Keays’ $1 million reward, a quarter of the fine is earmarked for maritime conservation, with at least $1 million directed towards British projects. Mr Keays filmed and photographed the secret pipe, the tanks containing the oily bilge water and onboard computers that were manipulated to show false discharge readings. In a statement, Princess Cruises said: “We are extremely disappointed about the inexcusable actions of our employees who violated our policies and environmental law.” (The Times)*

After four years of development, the first international standard for sustainable procurement was launched late last week by the International Standards Organisation (ISO).  ISO 20400, which boasts 38 participating countries and 14 observing nations and represents 73 per cent of carbon emissions,  aims to help companies make better purchasing choices throughout their supply chains by establishing guidelines for companies to judge suppliers on ethical and sustainability issues. A guidance standard rather than a certification standard, it will also take account of social and economic sustainability when judging what sustainable purchasing looks like. Jacques Schramm, chair of ISO/PC 277, the committee which developed the standard, said it would help organisations avoid the financial, environmental, and reputational risks associated with poor supply chain management.  (Business Green)

The scientific team — from the University of Delaware, the University of Minnesota and the University of Massachusetts — has invented a process to make butadiene, a molecule traditionally made from petroleum or natural gas, from renewable sources like trees, grasses and corn.  The findings, now online, will be published in the American Chemical Society’s ACS Sustainable Chemistry and Engineering, a leading journal in green chemistry and engineering. ‘Our team combined a catalyst we recently discovered with new and exciting chemistry to find the first high-yield, low-cost method of manufacturing butadiene,’ says Dionisios Vlachos, Director of the University of Delaware’s Catalysis Center for Energy Innovation (CCEI). The invention of renewable rubber is part of CCEI’s larger mission. Initiated in 2009, CCEI has focused on transformational catalytic technology to produce renewable chemicals and biofuels from natural biomass sources. (Science Daily)

Google has requested 1.5 million gallons of groundwater per day to cool the servers at its Berkeley County facility, hoping to draw the water from the county’s aquifer. The internet giant has studied various options for cooling its servers and has found that pumping groundwater was the best solution. The request comes at a time when a commercial boom in the area has led to companies (and residents) using water at a faster rate than the aquifers can replenish.  As Josh Henretig, senior director of environmental sustainability at Microsoft points out, companies that don’t plan for the long-term when it comes to water risks, “are not able to make smart investments in new technologies and in mitigation efforts that would move production from one facility to another. They’re putting their brands and their reputations at risk.” For instance, Microsoft has been striving to make better use of recycled water with a $140,000-a-year cost savings, and a 58-million-gallon avoidance of fresh water use per year. (Environmental Leader)

Image source: at Pexels. CC0 License. Free for personal and commercial use. No attribution required