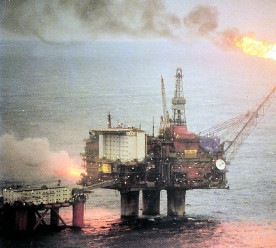 Big Oil, the world’s largest publicly owned oil and gas companies, is starting to challenge the biggest utilities in the race to erect wind turbines at sea. Royal Dutch Shell Plc, Statoil ASA and Eni SpA are moving into multi-billion-dollar offshore wind farms in the North Sea and beyond. They’re starting to score victories against leading power suppliers including Dong Energy A/S and Vattenfall AB in competitive auctions for power purchase contracts, which have developed a specialty in anchoring massive turbines on the seabed.. Even as oil production declined in the North Sea over the last 15 years, economic activity has been buoyed by offshore windmills. About $99 billion has been invested in North Sea wind projects from 2000 to 2017, according to Bloomberg New Energy Finance. While crude still supplies almost a third of the world’s energy, emerging fossil-fuel alternatives including wind and solar power are starting to limit growth in oil demand. Those technologies and electric cars may displace as much as 13 million barrels of oil a day from global demand by 2040. (Bloomberg)

Kraft Heinz Co., rebuffed recently in its bid to buy Unilever, is investing $200 million in an expanded corporate social responsibility program that includes a pledge to fight malnutrition and decrease its environmental footprint. The Kraft Heinz announcement comes about a month after the company pulled a $143 billion bid to buy Unilever, saying it didn’t want to get involved in a politically charged takeover fight. Now, Kraft Heinz is pledging to donate 1 billion nutritious meals to people in need by 2021, improve the sustainability of its supply chain and reduce its greenhouse gas emissions by 15 percent. With the expanded program, the company plans to examine how it sources palm oil and is “committed to the humane treatment of animals,” among other things. Also, earlier this year, Kraft Heinz announced it was partnering with Oprah Winfrey on a line of refrigerated meals to donate 10 percent of the profits to organizations fighting hunger. (Bloomberg)

Australia Inc told to keep out of gay marriage debate

Australian business leaders on Monday defended their right to campaign for same-sex marriage following calls by two government ministers for them to keep out of the debate, which risks dividing the ruling coalition. Peter Dutton, immigration minister, said at the weekend that business leaders should focus on shareholder returns, rather than use their companies to drive their own agendas. He also criticised Alan Joyce, the gay chief executive of Australian airline Qantas, for using his position to campaign for same-sex marriage. Tim Reed, chief executive of MYOB, an Australian-based business software company, said the campaign for marriage equality was clearly supported by his workforce. Two senior Liberal party ministers at the weekend rejected Mr Dutton’s comments, noting that free speech should be protected.  The leaders of 30 of Australia’s biggest companies, including Qantas, Commonwealth Bank and Telstra, have signed an open letter urging the government to act in the near term to legalise gay marriage. (Financial Times*)

Timberland and Thread Partner to drive social mpact in Haiti

Earlier this month, outdoor gear giant Timberland announced a partnership that quickly drew attention across the web. The company’s newest clothing collaboration is with Thread, a Certified B Corporation based in Pittsburgh which transforms plastic bottles from the streets of Haiti and Honduras into what it calls “the most responsible fabric on the planet.” The Timberland X Thread collection features five styles of men’s footwear, two bags and one T-shirt. Thread has hyper-local supply chain, meaning that each bottle that makes up these pieces is collected for this specific purpose. In addition, Thread employs local collectors and works with locally-owned processing centers to source its raw materials. “This partnership is different from just another recycled materials announcement,” said Thread’s CEO, Ian Rosenberger. He went on to say that “The fact that Timberland is connecting people in the first mile of supply chains with the consumer is really unprecedented. (Triple Pundit)

Dads who want to be more involved in the care of their children fear that asking for more flexible hours might damage their careers, the chairwoman of a new probe into the issue says. The Women and Equalities Committee inquiry aims to find out how much support fathers receive at work. The inquiry comes in the wake of the 2017 Modern Families Index, authored by employment campaign group Working Families, which suggested that while family was the highest priority for fathers, half of those interviewed felt their work-life balance was increasingly a source of stress. Sarah Jackson, chief executive officer of Working Families told the select committee that paternity leave and shared parental leave should be a “day one” right for all fathers. Tina Miller, Professor of Sociology at Oxford Brookes University noted that while the introduction of Shared Parental Leave was an important signal of change, men and women still don’t have equal choices over who would work in a family. (BBC)

Source of information: The oil platform Statfjord A with the flotel Polymariner at Wikipedia Commons. Public Domain