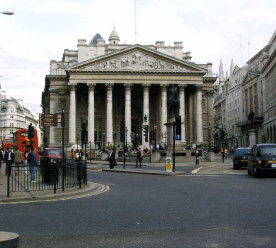 HSBC, the Royal Bank of Scotland, Lloyds, Barclays and Coutts are among 17 banks based in the UK which processed $738.1m in transactions apparently involving criminal money from Moscow. The banks are facing questions are facing questions over what they knew about the international scheme and why they did not turn away suspicious money transfers. One senior figure involved in the inquiry said the money from Russia was “obviously either stolen or with criminal origin”. Investigators are still trying to identify some of the wealthy and politically influential Russians behind the operation, known as “the Global Laundromat”. The Guardian showed details of the transfers to L Burke Files, an international financial investigator. He said compliance checks at many western banks were desultory, and often little more than “box ticking”. (Guardian)

Google has found itself at the center of a British storm in recent days after major companies from supermarkets to banks and consumer groups pulled their adverts from its YouTube site after they appeared alongside videos carrying homophobic and anti-Semitic messages. Alphabet’s Google launched a review of the problem on Friday, apologized on Monday and said on Tuesday it had revamped its policies to give advertisers more control. The company, which had said it struggled to monitor the 400 hours of video uploaded to YouTube every minute, said it would hire significantly more staff and speed up the process of removing ads from hateful and offensive content that attacks people based on their race, religion or gender. Google said the YouTube team was looking at changing its existing guidelines on what content should be allowed on the platform and giving more visibility to advertisers and agencies so they can see where adverts are appearing. (Reuters)

Investment giant BlackRock launched a Green Bond Index Fund yesterday, offering investors exposure to a selection of green bonds in a product that BlackRock said will be “optimised” to deliver investment performance in line with the total return of the Bloomberg Barclays MSCI Global Green Bond Index. “We see a strong interest in Green Bonds from clients we service as they seek to participate in climate friendly and environmentally beneficial investments without making major changes to sector allocation or liquidity risk in their holdings,” head of climate solutions Ashley Schulten said in a statement. Her remarks echo comments made by S&P Dow Jones Indices, which earlier this month launched a Green Bond Select Index after noting “strong demand” for investment opportunities with strong environmental, social and governance (ESG) credentials. Meanwhile, the Shenzen Stock Exchange and Luxembourg Stock Exchange yesterday announced the launch of a new Green Bond Index Series tracking China’s green bond market in comparison to Europe. (Business Green)

Uber is facing a fresh legal challenge from a tax barrister and campaigner over its payment of value added tax. Jo Maugham, director of the Good Law Project, delivered a “letter before action”, the first step in the legal process, to Uber London’s headquarters on Monday. He said that an employment tribunal case last year ruled that Uber supplied transport services and, if that were the case, it should charge VAT at 20 per cent on its fares and pay that money to HM Revenue & Customs. Uber, which is appealing against the tribunal decision, does not charge VAT. Mr Maugham wants the High Court to order Uber to provide him with a VAT receipt for a journey from his office to meet a client last week. He claims that the law gives him a right to a VAT receipt for that journey and that Uber cannot give him the receipt without accepting it is liable to charge VAT. If he wins the case, it will be very difficult to see how Uber can avoid charging VAT in the UK, he said. Uber said: “Drivers who use the Uber app are subject to the same VAT laws as any other transportation provider in the UK.” (Financial Times*)

The Water Risk Monetizer, enables businesses to factor current and future water risks into decision making, and now also incorporates water quality into its site-specific risk analysis to provide a more comprehensive risk assessment. The online tool with its new features helps businesses understand the impact of water quantity and quality on their operations, and gives them the insights they need to make more sustainable business decisions, its creators say. It was developed by water technology and services firm Ecolab and environmental data and risk analysis specialists Trucost, and built on Microsoft Azure Cloud technology. The Water Risk Monetizer uses local water basin datasets, economic techniques and scientific methodologies developed by Trucost to monetize water-related business risks. The tool quantifies the full value of incoming and outgoing water to a specific location based on basin-level quantity and quality considerations – taking into account tangible factors such as scarcity and quality as well as less tangible human health and environment impacts of water use. (Environmental Leader)