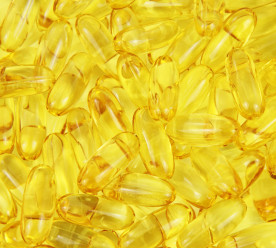 Supplements of healthy fats could be an immediate way of cutting the harm caused to billions around the world by air pollution, according to emerging research. The new research on mice showed that omega-3 fatty acids (OFAs), found in flax, hemp and fish oils, can both prevent and treat the inflammation and oxidative stress caused by air pollution, with the OFAs delivering a 30-50% reduction in harm. Low air quality has long been linked to lung and heart disease and strokes, but scientists are now uncovering links to brain problems such as dementia, mental illness and reduced intelligence, as well as diabetes, kidney disease and premature births. In September, a new inhaler that could protect the lungs was revealed, and the British Lung Foundation (BLF) recommends avoiding hotspots such as busy road junctions when pollution levels are high and reducing strenuous outdoor exercise. The discovery of “abundant” toxic nanoparticles from air pollution in human brains was also revealed in September. (Guardian)

Amazon claims it is powering more data centers with renewable energy, and its founder, Jeff Bezos, is a huge advocate of wind power. Now, Amazon is doubling down on rooftop solar. The company says it will install 15 photovoltaic systems on various facilities across the U.S. this year. Another 50 installations will appear in the U.S. and atop some overseas locations by 2020. This year alone, new solar projects in California, Delaware, Maryland, Nevada and New Jersey will generate 41 megawatts of power. Amazon claims that each solar installation will generate 80 percent of the facility’s annual electricity needs on average. In the meantime, Amazon reveals it is doing its part to decrease excess packaging by encouraging customers to fill up empty Amazon boxes with unwanted clothing and household goods; those boxes in turn can be shipped for free to one of the company’s partner NGOs, and is also working on a more ethical supply chain that respects human rights. (Triple Pundit)

Rolls-Royce and Nestlé explore the benefits of flexible energy generation

Flexible energy generation, led by battery storage and demand response measures, is a route being “actively explored” by energy-intensive multinational firms Rolls-Royce and Nestlé. The business case was put forward by companies across the private sector spectrum throughout the day at the edie Energy Management Conference in Birmingham on Tuesday (28 February). Rolls-Royce’s energy manager Anthony Hatfield revealed the engineering firm was “actively seeking” to reduce peak demand at its global test facilities to minimise its environmental impact and maintain competitiveness. The proposals form part of broader efforts to reduce emissions by 50% by 2025, from a 2014 baseline, along with an aim for energy use to fall by 30% by 2020. As for Nestlé the water branch of the company recently confirmed it will source 100% of its electricity from renewable energy sources at its UK bottling plant in Buxton. Nestlé looks to meet its 2020 goal to reduce its carbon intensity by 35% on a 2010 baselines. (Edie)

Vodafone‘s  ReConnect programme is the latest in a number of initiatives aimed at recruiting women who have taken a career break. The telecoms company aims to hire 1,000 people worldwide over three years — half in frontline roles, such as call centres and shops, and the other half in managerial positions. It hopes to tap a deep pool of skilled workers who are trying to return to a job after up to a decade out of the workplace.  Vodafone’s programme is not restricted to former Vodafone staff and is open to men as well as women. The scheme will extend to 26 countries and include refreshment of skills and flexible working options. In 2015, Vodafone became one of the first multinational companies to offer new mothers equal minimum maternity leave — set at 16 weeks — around the globe. It also offers full pay for new mothers for a reduced 30-hour week for their first six months back at work. (Financial Times)*

More than 700 of the 4,000 native bee species in North America and Hawaii are believed to be inching toward extinction due to increased pesticide use leading to habitat loss, a scientific study showed on Wednesday. The Center for Biological Diversity’s report concluded that of the 1,437 native bee species for which there was sufficient data to evaluate, about 749 of them were declining. Some 347 of the species, which play a vital role in plant pollination, are imperiled and at risk of extinction, the study found. “It’s a quiet but staggering crisis unfolding right under our noses that illuminates the unacceptably high cost of our careless addiction to pesticides and monoculture farming,” its author, Kelsey Kopec, said in a statement. Habitat loss, along with heavy pesticide use, climate change and increasing urbanization are the main causes for declining bee populations, the study found. (Reuters)