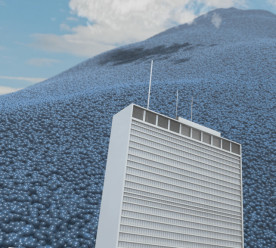 Uber Technologies Inc. Chief Executive Officer Travis Kalanick is stepping down from President Donald Trump’s business advisory council after criticism from customers and drivers. Kalanick’s participation on the council, along with more than a dozen other U.S. executives, prompted blow-back on social media after Trump’s controversial executive order on immigration. It snowballed into a #DeleteUber campaign that benefited rival Lyft Inc. Lyft quickly seized on its San Francisco rival’s missteps, as it promised $1 million to the American Civil Liberties Union over four years and put out a strong statement condemning Trump’s ban. Uber’s CEO wrote in an e-mail to employees that he had spoken briefly Thursday with the president about his concerns with Trump’s ban of immigrants from seven majority-Muslim countries. Kalanick told the president that he would no longer be involved with the advisory council. Other members of Trump’s Strategic and Policy Forum include Elon Musk, CEO of Tesla. “I understand the perspective of those who object to my attending this meeting, but I believe at this time that engaging on critical issues will on balance serve the greater good” Musk wrote on Thursday. (Bloomberg)

Radiation levels inside a damaged reactor at the Fukushima Daiichi nuclear power station are at their highest since the plant suffered a triple meltdown almost six years ago. The facility’s operator, Tokyo Electric Power (Tepco), said atmospheric readings as high as 530 sieverts an hour had been recorded inside the containment vessel of reactor No 2, one of three reactors that experienced a meltdown when the plant was crippled by a huge tsunami in March 2011. A single dose of one sievert is enough to cause radiation sickness and nausea; 5 sieverts would kill half those exposed to it within a month, and a single dose of 10 sieverts would prove fatal within weeks. The presence of dangerously high radiation will complicate efforts to safely dismantle the plant. In December, the government said the estimated cost of decommissioning the plant and decontaminating the surrounding area, as well as paying compensation and storing radioactive waste, had risen to 21.5tn yen (£150bn), nearly double an estimate released in 2013. (Guardian)

Oil and coal demand could peak by 2020: Study

A drop in the cost of solar and electric vehicle technology could see demand for coal and oil peaking by 2020, according to a new report from the Grantham Institute at Imperial College London and the Carbon Tracker Initiative.  The analysis cautions that large energy companies adopting a “business as usual” attitude are underestimating the advances of low carbon technologies. The report proposes a new ‘starting point’ scenario that takes in cost reduction projections for electric vehicles and solar photovoltaic technology, as well as emissions commitments made under the historic Paris Climate Agreement. The research sees, among other things: solar photovoltaic technology providing 29 percent of global power generation by 2050, phasing out coal in the process; electric vehicles making up more than two thirds of the road transport market by 2050; and demand for coal and oil peaking by 2020. Furthermore, growth in electric vehicles could result in the displacement of around two million barrels of oil per day by 2025 and 25 million barrels per day by 2050. “Electric vehicles and solar power are game-changers that the fossil fuel industry consistently underestimates,” Luke Sussams, senior researcher at Carbon Tracker. (CNBC)

Swedish food processing and packaging company Tetra Pak has on Thursday pledged to reduce emissions by 58% through a partnership with the Science Based Targets Initiative (SBT), which calls on companies to set emission reduction targets in-line with reaching the 2OC pathway established by the Paris Agreement. Tetra Pak will work across its value chain to reduce emissions by 58% by 2040 against a 2016 baseline. Tetra Pak’s vice president of environment Mario Abreu said: “The new targets ensure we are able to openly and accurately demonstrate the contribution we are making to a low carbon economy among customers and other stakeholders.” The Swedish firm is known for its bio-based cartons and becomes the first company within the food packaging industry to have its emissions targets approved by the SBT initiative. Despite a 16% growth in production since 2010, the firm has worked with suppliers to cut emissions by 15% in the same timeframe. (Edie)

With between 4.8 million and 12.7 million tons of plastic ending up in the world’s oceans every year, it could be considered one of the most dangerous environmental catastrophes the world currently faces. Broadcasting company Sky is mobilizing its resources to increase awareness of the issue with a new Ocean Rescue digital campaign, using behavior change tips and celebrities, including Sir Richard Branson, Prince Charles and astronaut Tom Peake, to inspire and educate consumers. The company used its Sky News outlet to place a particular focus on important ocean plastic waste reports published by the likes of the Ellen MacArthur Foundation, and has been offering tips and advice through Twitter and Facebook. Also, Sky launched its successful Rainforest Rescue project in 2009, which raised £9 million to prevent the destruction of a billion trees in the Amazon rainforest. The Proctor & Gamble Company (P&G) will be mass-producing the world’s first recyclable shampoo bottle made from 25 percent post-consumer recycled beach plastic, and Adidas has set its sights on delivering 7,000 pairs of trainers made from 95 percent ocean plastic to the market. (Sustainable Brands)