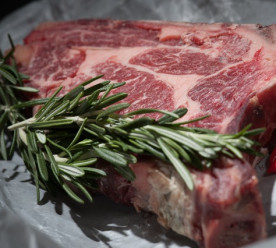 British labour rights campaigner Andy Hall has left Thailand after a three-and-a-half year legal battle with pineapple processing company Natural Fruit. The dismissal of one set of charges against the British activist – over a report he contributed to, accusing the company of abusing its workforce – was confirmed last week. However, he was convicted in September on two other counts under sweeping criminal defamation and computer crimes laws. But it was the prospect of further criminal charges over another group of workers he is supporting that persuaded Mr Hall that he should leave Thailand and not return. Mr Hall said in a statement that the situation for human rights defenders has rapidly deteriorated in Thailand, with significantly increased risks. (BBC)

Tax meat and dairy to cut emissions and save lives, study urges

Climate taxes on meat and milk would lead to huge and vital cuts in carbon emissions as well as saving half a million lives a year via healthier diets, according to the first global analysis of the issue conducted by the Oxford Martin Programme on the Future of Food. The study suggests that surcharges of 40 percent on beef and 20 percent on milk would account for the damage their production causes people via climate change. These taxes would then deter people from consuming as much of these foods, reducing emissions by 1 billion tonnes a year – the same as the entire global aviation industry. (Guardian)

Scandal-struck UK retailer Sports Direct has been accused of attempting to secretly record a group of MPs having a private conversation during a warehouse inspection. Six MPs from the business select committee arrived to carry out a spot-check of the company’s controversial Shirebrook premises, where they claimed management used “diversionary tactics” during a three-hour tour of the site. Following the tour, they retired to a private room to discuss what they’d seen where they said they found a camera recording their conversation. Sports Direct chief executive Mike Ashley had been previously warned by MPs they would make an unannounced visit to inspect the warehouse after the company faced harsh criticism over working conditions for staff. (Independent)

China, the world’s biggest clean-energy investor, has lowered its solar and wind power targets for 2020, a reflection of how record installations of renewables have overwhelmed the ability of the nation’s grid to absorb the new electricity. China is now aiming for 110 gigawatts of solar power by 2020, a 27 percent reduction from an earlier target. While the country has poured billions of dollars into clean energy in recent years, the ability to deliver the electricity from where it’s produced to where it’s needed has lagged. The mismatch has left solar and wind capacity sitting idle in some parts of the country. Still, even with the lowered ambitions, solar is expected to more than double by 2020 from 2015 levels, while wind will increase by 50 percent, according to Bloomberg New Energy Finance data. (Bloomberg)

Smart technology that could shave £90 off household energy bills and curb carbon emissions is being stymied by UK government policy, according to the think tank Policy Exchange. Its report claims that current energy policy offers too many incentives to build polluting diesel generator farms at the expense of cleaner technology. The think tank pointed to an estimate by the government’s National Infrastructure Commission that a smarter, more flexible power grid could reduce energy costs by £8 billion by 2030. Policy Exchange calls for lower carbon taxes on battery storage, and greater penalties for emissions released by diesel generators. (Guardian)