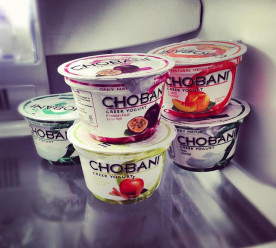 Top oil companies are joining forces to set up an investment fund to develop technologies to cut carbon emissions and promote renewable energy. The chief executives of BP, Eni, Repsol, Saudi Aramco, Shell, Statoil and Total, will announce details of the fund and other steps to reduce greenhouse gases in London on Friday, coinciding with the formal entry into force of the 2015 Paris Agreement to phase out man-made greenhouse gases in the second half of the century. The new fund will also focus on ways to reduce costs of carbon capture and storage technology. The group is part of the Oil and Gas Climate Initiative, which was created with the backing of the United Nations in 2014 and includes 11 companies representing 20 percent of global oil and gas production. (Reuters)

In this contentious US election season, Chobani – a yoghurt company with 2,000 employees in New York and Idaho – has become the focus of racist attacks. Chobani’s founder, Hamdi Ulukaya, is a Turkish immigrant of Kurdish descent. He has been a vocal advocate for helping refugees – employing more than 300 in his factories, starting a foundation to help migrants, and traveling to the Greek island of Lesbos to witness the crisis firsthand. In January, Mr Ulukaya spoke at the World Economic Forum in Davos, on the need for corporations to do more to assist refugees. Cisco, IBM, Salesforce and more joined others in pledging assistance to refugees, working with Mr Ulukaya’s Tent Foundation. “He’s the xenophobe’s nightmare,” said Kenneth Roth, executive director of Human Rights Watch. “Here’s an immigrant who isn’t competing for jobs, but is creating jobs big time. It runs completely counter to the far-right narrative.” (New York Times)

A new report by the Institute For Public Policy Research, supported by Greenpeace, calls for cross-party support for radical plan to bring emissions in London down to legal levels. The report shows that diesel vehicles are responsible for nearly 40 percent of all NO2 emissions in London and need to be comprehensively tackled with a view to phasing them out, in order to ensure air pollution is brought to safe levels. London is currently breaking WHO limits for NO2 and particulate matter, which means 10,000 lives prematurely lost every year and an annual cost of £3.7 billion. The report comes as the UK’s high court has ruled for the second time in 18 months that the government’s plan for tackling air pollution is illegally poor. (Greenpeace; The Guardian)

Roof tiles with built-in solar panels have been unveiled by Tesla chief executive Elon Musk. The tiles, made from glass, are intended to be a more attractive way to add solar panels to homes, compared with currently-used solar technology. Musk said the tiles are comparable to competing high-efficiency solar panels. The current prototypes reduce the efficiency of the underlying solar cell by just 2 percent. With further refinement, Musk said he hopes the microscopic louvers responsible for making the tiles appear opaque can be used to actually boost the efficiency of the solar cells. (BBC; Bloomberg)

Boeing and Commercial Aircraft Corp. of China (COMAC) have signed a new agreement to expand their joint research collaboration on long-term sustainable growth of commercial aviation. Through this new agreement, both companies will fund research by China-based universities and research institutions through the renamed Boeing-COMAC Sustainable Aviation Technology Center. Since their initial agreement in 2012, the collaboration has conducted 17 research projects, leading to an aviation biofuel demonstration facility that turns waste “gutter oil” into jet fuel and three air traffic management software prototype systems. (3BL Media)