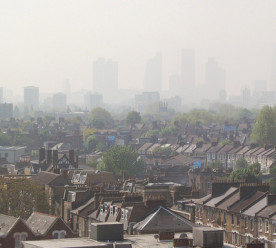 A new deal to reduce the use of powerful climate-changing chemicals will require Senate approval in the US. Legal experts say the agreement risks being blocked by Republican senators. The HFC agreement was designed to accelerate a shift to safer substitutes for some of the world’s fastest growing and most harmful greenhouse gases. American experts on international environmental law say ratifying the new HFC agreement would almost certainly require a two-thirds vote from the Senate. If enough countries formally agree to join, the new agreement could take effect in 2019. Republicans currently control both chambers of Congress and they have been steadfast in their opposition to nearly all legislation involving climate change. If the US failed to ratify the agreement, it’s hard to predict how the global use of HFCs would be affected, though it may cause the leaders of other countries to balk at the idea of joining the pact, slowing momentum on climate action. (Guardian)

The UK government is being hauled back before the courts over its failure to tackle air pollution. In a case beginning today, the group ClientEarth is asking the High Court to order ministers to come up with a better plan for improving air quality. The case concerns levels of nitrogen dioxide, an invisible gas produced mainly by road traffic. In the UK, 37 out of 43 zones breach the limits of the legal limits for nitrogen dioxide levels. The case was referred to the European Court of Justice, which ruled in 2014 that national courts should ensure that governments act to get air pollution below legal limits. Then the case went back to the UK’s Supreme Court, which ordered the UK’s environment minister to take “immediate action” by preparing and consulting the public on an air quality action plan in the shortest possible time. But very little has been done. The government announced it would begin a public consultation on its plan only last week – just days before the court case began. (New Scientist)

The Thomson Reuters Foundation, unveiled today the 10 companies shortlisted for its Stop Slavery Award. The Award is the first global recognition for businesses that have excelled in efforts to eradicate forced labour from their supply chains. All applicants completed an extensive questionnaire developed in partnership with global law firm Baker & McKenzie and the submissions to the Award have been assessed by an independent third party, DataREVSystems.  Apple and Tesco are amongst the biggest global brands selected from a number of applicants spanning clothing retailers to hospitality companies. “We launched this award to demonstrate that business can play a critical role in helping to put an end to modern-day slavery worldwide,” said Monique Villa, CEO of the Thomson Reuters Foundation. (Thomson Reuters Foundation)

IBM‘s artificial intelligence platform Watson will work with doctors in Germany attempting to solve some complex medical cases. So far, the system has looked at half a dozen cases, but it is unclear how many it has correctly diagnosed.  AI systems are increasingly being used in healthcare, with Google’s DeepMind partnering with several UK hospitals. The Watson partnership, with private hospital group Rhon-Klinkum AG, will be piloted from the end of the year. Since it opened in 2013, University Hospital of Giessen and Marburg has had more than 6,000 patients on its waiting list. There has been controversy around the idea of technology firms having access to patient data, with some critics saying such firms should get more explicit consent from patients before being given their medical records. (BBC)

Scientists from Singapore’s A*Star have invented a new form of plastic packaging that keeps food fresh for longer and at higher temperatures. The improved plastic cover can prevent consumers from throwing away perfectly edible food. It absorbs gases that accelerate decomposition and even indicate the quality of the food within. This new plastic offers three functions. Firstly, it has been designed to be a “high barrier” and keep out oxygen.  The second variation is called “active” packaging, which is plastic containing elements that absorb oxygen, moisture or ethylene, an organic compound. Finally, “intelligent” food packaging can indicate if the food is still edible or if the packaging integrity has been damaged. Dr Li Xu, leader of the team of researchers, predicted that high barrier packaging could come into mainstream use as soon as next year, though intelligent food packaging may only be ready in the next five years. (Eco-Business)