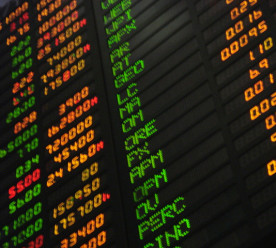 A new study by Corporate Knights ranks 45 global stock exchanges on overall sustainability disclosure. Out of 4,469 large companies analysed, only 47 percent disclose greenhouse gas emissions, despite a number of high-profile policy initiatives aimed at sustainability disclosure. Euronext Amsterdam topped the ranking, with over 50 percent of its large listings disclosing all four environmental metrics tracked by Corporate Knights. European stock exchanges dominated the top 10, with the exception of the Australian Securities Exchange and the Johannesburg Stock Exchange. The London Stock Exchange, which placed eighth in the ranking, saw 95 percent of its large companies disclose GHGs. (Corporate Knights)

UK supermarkets have come under fire after the National Farmers Union (NFU) lodged an official complaint over the misleading use of farm branding by supermarkets on some food products. It singled out Tesco and its seven made-up farm brands, which include ‘Willow Farm’ and ‘Rosedene Farm’. The NFU claimed the fictitious brands made customers believe they were buying products farmed in the UK. Tesco has defended the brands, saying its customers were well aware that the supermarket was so big it could not possibly source all its products from individual farms. NFU president Meurig Raymond praised Aldi for its commitment to source its “fake” farm brand produce only from the UK by the end of March next year. (Independent)

Facebook under fire for ‘censoring’ Kashmir-related posts and accounts

Facebook has censored dozens of posts and user accounts after the death of a high-profile Kashmiri separatist militant, who was killed by the Indian army earlier this month. Academics, journalists and the pages of local newspapers are among those who have had photos, videos and entire accounts deleted by Facebook after they posted about recent events in the disputed territory. Authorities lifted a three-day publication ban on newspapers on Tuesday, but editors refuse to resume printing until the government apologises. Kashmiris say that the information blackout has been exacerbated by censorship on Facebook. Social media companies such as Facebook are under increasing pressure to limit the spread of extremist propaganda – but have also faced criticism that they have gone too far. (Guardian)

Food giant Kellogg’s has been banned from telling consumers that its Special K cereal is “full of goodness” and “nutritious” in UK ad campaigns. Kellogg’s ran a TV ad for Special K cereal promoting it as a “five grain super porridge full of goodness”. The company’s website also says the cereal helps make “a nutritious start to your day”. Under Advertising Standards Authority (ASA) rules, companies cannot make general health claims unless backed up by a specific health benefit for the consumer. “We’re pleased the ASA acknowledged that Kellogg’s has authorised health claims… However, we apologise for the error in not ensuring this was made clear enough for our consumers. This has now been corrected,” said a spokesperson for Kellogg’s. (Guardian; Marketing Week)

Two drivers have taken Uber to a British employment tribunal arguing that the ride service is acting unlawfully by not offering rights such as holiday and sick pay, in a test case that could force the app to change its business model. Uber, which allows users to book and pay for a taxi by smartphone, says its more than 30,000 London drivers enjoy the flexibility of being able to work when they choose and receive on average more than the minimum wage. The firm, whose investors include Goldman Sachs and Alphabet unit Google, has grown rapidly around the world but has faced protests, bans and restrictions in a number of cities. A ruling in favour of the two drivers bringing this test case could lead to dozens more coming forward and affect the firm’s reliance on the self-employed. (Reuters)

Image credit: Phillippine stock market board by Katrina.Tuliao / CC BY 2.0