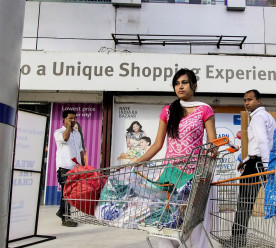 The majority of the biggest companies from emerging markets are failing to lift the lid on their operations, creating an environment where corruption can thrive, according to a study by Transparency International. The NGO evaluated 100 of the fastest-growing companies based in 15 emerging markets, scoring them on anti-corruption programmes and country-by-country reporting. 75 percent of the companies scored less than five out of ten, while 72 firms disclose no tax information in foreign countries. “Pathetic levels of transparency in big emerging market companies raises the question of just how much the private sector cares about stopping corruption, stopping poverty where they do business, and reducing inequality,” said José Ugaz, chair of Transparency International. (Guardian)

Greenpeace has unveiled its 2016 ‘Detox Catwalk’ – ranking fashion brands on their efforts to clean up their supply chains. Over 70 major clothing labels made a commitment to Greenpeace to remove toxic chemicals from their supply chains completely by 2020, and the new report monitors their progress towards this goal. H&M, Benneton and Inditex – which owns Zara – are in the top category, described as “detox committed companies that are ahead of the field”. In the second ranking, featuring companies who are “committed to detox and have made progress [but] need to evolve faster”, brands include Mango, Adidas, Burberry, Primark, Levis, Puma and M&S. Companies “heading in the wrong direction” receiving the lowest scores include Nike, Espirit and Limited Brands – which owns Victoria’s Secret and La Senza. (Huffington Post)

Current and former executives, board members and investors say that successive crises at Volkswagen are united by the so-called “VW system” of governance. The system is built on deep connections between management, workers and local politicians – a situation made even more complex by layers of family ownership. VW does not have a single board of directors, but a supervisory board that is meant to hold management to account. Investors and governance experts say the emissions scandal shows that it lacks the independence and authority to do this. Yngve Slyngstad, chief executive of Norway’s $870 billion oil fund, is pushing for a revamp. “We of course hope that this event can lead to some rethinking in the company about what would be a good governance model,” he says. (Financial Times*)

Nearly two-thirds of sports fans think Adidas should reconsider its sponsorship arrangements with Lionel Messi, a snap poll has found, following the global football star’s conviction for tax fraud. The Argentinian, who plays for Spanish club champions FC Barcelona, was sentenced last week to 21 months in prison, although he is likely to serve it under probation. In a survey of 1,000 British people by the OnePulse mobile app, 65 percent said they believed Adidas should reconsider Messi’s sponsorship. On Saturday, Barcelona announced its support for its star, starting the hashtag #WeAreAllLeoMessi and encouraging fans to ‘express their sympathy’ for Messi. But Twitter users and communications professionals condemned the ‘car crash’ campaign, calling it “confirmation of everything rotten about football”. (PR Week* 1, 2)