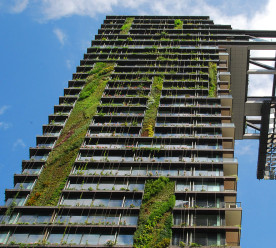 The Science Based Targets initiative, set up by CDP, UN Global Compact, WRI, and WWF, which aims to persuade companies to set emissions reductions targets in line with keeping global warming to well below two degrees, now has more than 168 signatories. The initiative has been growing at a rate of two companies a week since its launch in May last year. Most recently, tech firms Autodesk, UBM, and Advanced Micro Devices (AMD), and hospitality giant Host Hotels and Resorts have all pledged to cut their emissions in line with science-based goals. “Science-based targets help drive innovation, reduce costs, and enhance profitability. Companies that set them gain long-term competitive advantage and safeguard their future prosperity,” said Paul Simpson, chief executive of CDP. (Business Green)

WWF Singapore has launched a new alliance on sustainable palm oil to boost demand for the commodity, and to help tackle the haze pollution that has plagued the region for decades. The alliance seeks to connect players in the palm oil industry, retailers and manufacturers to tackle deforestation and haze. “This is a timely opportunity for NGOs and businesses to work together towards transforming the palm oil industry,” said WWF Singapore chief executive officer Elaine Tan. The five founding members comprise Unilever, Ayam Brand, Danone, IKEA and Wildlife Reserves Singapore. WWF added that the alliance complements the efforts of the RSPO, and it is now seeking like-minded organisations to join. (Eco-Business)

The World Green Building Council (WGBC) has launched a project that aims to ensure all buildings are ‘net zero’ by 2050, in its intention to help deliver on the promise of the Paris Agreement to reduce global greenhouse gas emissions. Net zero buildings are capable of generating clean, renewable energy on-site to meet all of their heating, cooling, lighting and other electricity needs. The project will mobilise Green Building Councils in different countries to launch national net zero certification programmes. The project targets for all new buildings and major renovations to be built to net zero standards starting in 2030. WGBC aims to train 75,000 professionals worldwide on net zero building by 2030, and 300,000 by 2050. (Eco-Business)

Rio Tinto has cut the number of its companies that operate in tax havens after a review prompted by growing concerns over possible tax avoidance by multinationals. The mining group said 17 of its 600 controlled entities were resident in tax havens in 2015, three fewer than in 2014. Rio is currently in dispute with the Australian Taxation Office over its use of a company based in Singapore. Chris Lynch, Rio’s chief financial officer, said that the company supported global efforts to prevent aggressive tax avoidance and accepted OECD recommendations for companies to provide country-by-country tax reporting. The board has set the principle that profits should be taxed in the country where the business was carried out, but Rio should be free to take advantage of tax concessions offered by countries. (Financial Times*)

The Inter-American Investment Corporation (IIC) has increased its loan portfolio in Chile with the recent financing of a solar photovoltaic plant and a project to improve access to credit for small and medium enterprises (SMEs). Los Loros solar photovoltaic plant, owned by the French company Solairedirect, will generate 54 MWp of renewable energy in the Atacama Desert to be sold entirely to the spot market of Chile. The project will help diversify the country’s energy matrix, while avoiding the annual emission of 74,800 tonnes of greenhouse gases. The IIC has also disbursed a loan of $20 million to Tanner Financial Services in order to increase Tanner’s portfolio of SMEs in Chile and improve access to finance for such companies. (Inter-American Development Bank)

Image source: Hanging gardens of One Central Park, Sydney by bobarc / CC BY 2.0