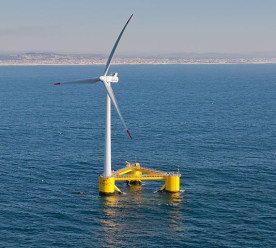 Shell, Europe’s largest oil company, has established a separate division, New Energies, to invest in renewable and low-carbon power. The move emerged days after experts warned that oil companies must transform their business or face a “short, brutal” end within 10 years. It also comes after Shell released a report on the impact of a ‘below 2°C’ scenario on its business. The new division brings together Shell’s existing hydrogen, biofuels and electrical activities but will also be used as a base for a new drive into wind power. The decision follows similar moves by other oil companies, such as France’s Total, which already boasts of being the world’s second-ranked solar energy operator. Company insiders claimed Shell wants to play down the importance of New Energies for fear it will be written off as a “greenwash” exercise, but said the company believes the new business could become very big – although not for a decade or more. (Business Green)

The sustainable seafood market is surging, according to a new report. In 2015, demand from big retailers and restaurant chains pushed suppliers to certify a catch valued at $11.5 billion, says the study released by the International Institute for Sustainable Development (IISD). Sustainable seafood now accounts for 14 per cent of global production, an increase from just 0.5 per cent in 2005. “The rapid expansion of sustainable seafood practices is helping to address decades of mismanagement, which has led to the collapse of fisheries and destruction of fragile marine ecosystems,” said lead author Jason Potts, a senior associate at IISD. However, the study concludes that, while voluntary standards have established a strong foundation for enabling a transition to sustainable production practices, intergovernmental action is now required. (IISD)

The three children of Lord Sainsbury of Preston Candover, whose family trusts have given millions of pounds to the British Museum, have objected to BP’s sponsorship of the institution. They have signed a letter to the museum’s director, saying “while governments in Paris committed to transition away from fossil fuels, BP remains a barrier to progress”. It argues that “to receive sponsorship from BP is to condone these business practices, while retaining such an unethical sponsor would seriously damage the [museum’s] reputation”. The intervention comes as Sunken Cities, an exhibition supported by the oil giant, opens in the museum’s Sainsbury wing. A museum spokesman said: “The British Museum is grateful to BP for their ongoing support… Discussions regarding the renewal of the partnership are continuing.” (The Times*)

Norwegian energy company Statoil has been granted a lease to begin building the world’s first floating offshore wind farm off the east coast of Scotland. The Hywind project will consist of five 6-megawatt turbines, floating on steel tubes fastened to the seabed. Floating turbines allow offshore wind farms to be deployed in deeper waters, opening up the industry to areas such as Japan and Mediterranean countries. Statoil installed a floating turbine off the coast of Norway in 2009 for tests. This new project will be the first multi-turbine array. Works onshore and near-shore are planned to begin later this year, with turbines installed in 2017. (Bloomberg)

A report from the British aid charity Christian Aid, is warning that by 2060 more than a billion people worldwide will live in cities at risk of catastrophic flooding as a result of climate change. The study says the US, China and India are among the countries most threatened and the cities of Kolkata and Mumbai will be most at risk. The report urges governments to take action to reduce global warming and invest in disaster reduction programmes. Dr Alison Doig, the report’s author, said that people living in large coastal cities were particularly at risk. The study says that the priority should be to reduce carbon emissions and limit temperature increase. It says vulnerable communities must be helped by better protecting homes and livelihoods and also calls for international systems to help communities recover from devastating storms and floods. (BBC)