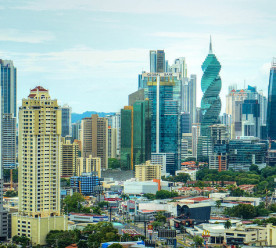 Australia has become the first country to launch investigations following a massive leak of documents from a Panamanian law firm that provide an insight into how the wealthy use offshore tax havens. Australia’s tax authorities said they are investigating more than 800 clients of Mossack Fonseca, which specialises in setting up offshore companies in tax havens. The UK and New Zealand tax authorities also said they were ready to look at any allegations of money laundering or tax avoidance. More than 11 million leaked documents from the firm demonstrate that as much as $2 billion has been shuffled through banks and offshore companies said to be linked to associates and friends of Vladimir Putin, the Russian president. Sigmundur Davio Gunnlaugsson, Iceland’s prime minister, is also facing allegations of hiding offshore holdings. Panama is the only significant financial centre that has held out against the global drive for the automatic exchange of tax information. According to Pascal Saint-Amans, the OECD’s top tax official, Panama will face intense political and commercial pressure in the wake of the revelations. (Financial Times*)

The FBI, US Department of Justice and anti-corruption police in Britain and Australia have launched a joint investigation into revelations of a massive global bribery racket in the oil industry. Last week, the Huffington Post and Fairfax Media published the results of a months-long investigation of Unaoil, an obscure Monaco-based firm. The biggest leak of confidential files in the history of the oil industry reveals that hundreds of major international corporations counted on Unaoil to secure lucrative contracts in Africa, the Middle East, and the former Soviet Union. Leaked emails show individual executives and managers from US giant Halliburton and its former subsidiary KBR knew or suspected that Unaoil was acting corruptly to win contracts in Kazakhstan. Italian oil giant Eni, Texas firm National Oilwell Varco, Singapore conglomerate Keppel, Norway’s Aker Kvaerner and Turkish GATE are also implicated. HSBC and Citibank are also under scrutiny for having processed transactions, managed money and vouched for Unaoil. “As a matter of policy, we only maintain relationships with clients who have been vetted through our strict due diligence and compliance checks,” an HSBC spokesperson said. (Huffington Post I, II)

While many companies report on their direct greenhouse gas emissions, few engage in research to project how vulnerable their business is to the financial risks posed by climate change. And for the few that do, the information they provide is of little use to investors. That is the initial conclusion from the Task Force on Climate-related Financial Disclosures, established last year by chair of the international Financial Stability Board and the Bank of England Mark Carney. Headed up by former New York Mayor Michael Bloomberg, the task force aims to produce a set of voluntary guidelines for climate-related risk disclosures. The task force’s first report presents the findings from its high-level review of the existing disclosure landscape. “The absence of a standardised framework for disclosing climate-related risks makes it difficult for preparers to determine what information should be included,” wrote Bloomberg. “The resulting fragmentation… has prevented investors, creditors and underwriters from accessing information that can inform their decisions.” (Business Green)

Saudi Arabia is planning to establish a $2 trillion sovereign wealth fund by selling off its state petroleum assets in preparation for a world beyond oil. If the fund was built up to $2 trillion, it would be more than double Norway’s sovereign wealth fund, regarded as the largest in the world by assets. The move was revealed by the country’s powerful deputy crown prince, Mohammad bin Salman, and would allow the country to use its public investment fund to buy up strategic financial and industrial assets abroad. “The image of Saudi Arabia is so inextricably linked to the oil age that this feels a bit like Switzerland quitting the banking sector,” said Charlie Kronick, a senior climate adviser at Greenpeace UK.  “The fact that they’re trying to decouple the country’s wealth from oil revenues will be seen by many as yet another sign that the end of the oil age is approaching fast. ” (Business Green)

US Soccer, the governing body for the sport in America, pays the members of the men’s and women’s national teams who represent the United States in international competitions. While the men’s team has historically been mediocre, the women’s team has been a phenomenon, winning world and Olympic championships. Citing this disparity, as well as rising revenue numbers, five players on the women’s team have filed a federal complaint accusing US Soccer of wage discrimination because, according to the female players, they earned as little as 40 percent of what players on the United States men’s national team earned. US Soccer officials pushed back forcefully on the players’ claims, citing figures that the federation said showed the men’s national team produced revenue and attendance about double that of the women’s team, and television ratings that were “a multiple” of what the women attract. (New York Times)