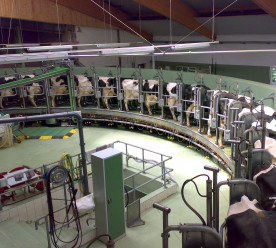 Some of the world’s leading food companies, including Waitrose, Hershey, Target, and Quorn, have joined a new coalition working to identify innovative techniques for meeting the world’s soaring demand for protein in a sustainable manner. The Protein Challenge 2040 aims to address how enough protein can be provided to support a rising global population without leading to further environmental destruction, such as deforestation and climate change, which is often linked to meat production. “Protein is essential for human health, but the current state of how it’s produced and consumed is just not sustainable in the long term,” said Andy Richardson, head of corporate affairs at dairy nutrition firm Volac, a founding member of the new group. Facilitated by sustainability non-profit Forum for the Future, the group brings together NGOs such as WWF and the Global Alliance for Improved Nutrition, with a host of blue chip food and retail brands. (BusinessGreen)

Big Oil must thwart the movement to leave fossil fuels in the ground, according to the Saudi oil minister. Addressing executives in Texas, Ali Al-Naimi said the industry had to shed its “Dark Side” image and show it was a “force for good”. By December 2015, over 500 institutions including large insurers, funds and banks managing US$3.4 trillion of assets had pledged to move out of fossil fuels for climate reasons – a 70-fold rise on September 2014. Fossil fuels were not the problem, but their “harmful emissions,” said Al-Naimi, who represents the hydrocarbon-rich Middle Eastern kingdom at UN climate talks. The world must scale up technologies that capture carbon dioxide, instead of replacing the polluting fuels with renewable sources, he added. (Guardian)

According to a new research, EU air quality policies are helping to save around 80,000 deaths a year, despite being widely criticised by green groups in recent months for being too weak. The study, led by a team at the University of Leeds, marks the first attempt to quantify the effectiveness of EU air quality policies in terms of lives saved. “Our work shows that EU policies have improved air quality,” said study co-author Dr Dominick Spracklen. “If the UK were to exit the EU, our air quality policy would no longer be subject to EU legislation, with potential implications for future air quality”. However, some legal experts pointed out a scenario where the UK leaves the EU but remains in the European Economic Area could result in tougher air quality rules being imposed in the long run. (BusinessGreen)

Global Internet-based firms could have their services blocked in Indonesia if they do not obtain “permanent establishment” status in the country and pay Indonesian tax, said government officials. “All have to create a permanent establishment, like the contractors for the oil sector, so they can be taxed,” he said. Indonesians are huge users of Google and social media sites. The country is considered Twitter‘s capital and is home to the world’s fourth-largest number of Facebook users. The Communication Ministry estimated digital advertising from Indonesia was worth about $800 million last year, but the business was left untaxed because of loopholes in regulations. Some of the internet giants have already formed legal entities in Jakarta, including Google, while Facebook and Twitter have representative offices. (Reuters)

FTSE 100 companies paid tax equal to 23 percent of their profits last year, almost a quarter less than in 2010, according to figures from accountants UHY Hacker Young. Falling corporation tax rates and the use of allowances have driven down the average effective tax rate paid by the UK’s biggest firms, the company said, and the rate looks set to drop further as more cuts come into effect. The figures show that the pharmaceutical sector had the lowest average effective tax rate, at 13 percent. Dwindling tax bills were “not going to play well with critics who are already up in arms over corporation tax ‘sweetheart’ deals with multinationals like Google,” said Clive Gawthorpe, partner at UHY Hacker Young. “However, this is less the result of rampant aggressive tax avoidance and more to do with changes to tax rates and reliefs, as well as profitability coming under pressure in some sectors such as pharmaceuticals.” (Guardian)