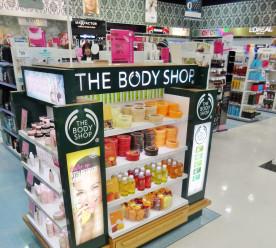 The Body Shop has unveiled a pioneering new global CSR strategy that will underpin all aspects of the company’s operations. Forty years after it was founded by green pioneer Anita Roddick, and ten years after she sold the chain to French cosmetics giant L’Oréal, The Body Shop’s new ‘Enrich Not Exploit’ commitment aims to reaffirm the company’s position as a leader in ethical business. The commitment consists of an extensive programme of global activity and measurable targets for 2020, focusing on enriching people, products and planet. Chairman and chief executive Jeremy Schwartz promised the commitment would see The Body Shop become the most ethical and sustainable business on the planet: “For us, being truly sustainable means shaping our business to work in line with the planet’s natural systems so they can replenish and restore themselves,” he said. The new 2020 targets include expanding the company’s Community Trade programme, sourcing 100% sustainably and ensuring that 70% of total product packaging does not contain fossil fuels. (Medianet; This is Money)

Larry Fink, the chief executive of the world’s largest investment firm, Blackrock, has called for companies to build environmental, social and governance (ESG) management into their business models, calling it a sign of ‘operational excellence’. In a letter to chief executives at S&P 500 companies and large European corporations, Fink warned that investors were looking for firms with sustainable long-term strategies in place. “Generating sustainable returns over time requires a sharper focus not only on governance, but also on environmental and social factors facing companies today,” Fink wrote. Just last week, funds controlled by Blackrock bought shares in three UK windfarms in a deal worth £423 million. In recent weeks, investors responsible for more than US$ 8 trillion have called on mining giants Anglo American, Glencore and Rio Tinto to be more transparent over the climate risks and impacts of their businesses. (edie)

The US Supreme Court agreed to block Barack Obama’s clean power plan on Tuesday, raising fears that the centrepiece of his climate change plan, rules cutting carbon emissions from power plants, could be overturned. The unexpected decision creates instant uncertainty about the future of Obama’s climate plan and the historic global agreement to fight climate change reached in Paris last December. The White House registered its immediate disapproval, stating the administration would continue taking “aggressive steps” to reduce climate pollution. The 5-4 decision for a stay came as a shock to the Environmental Protection Agency and environmental campaign groups, and was widely seen as a sign that opponents of the power-plant rules have made a strong argument against the plan. The main lobby group for the coal industry claimed the decision indicated the Supreme Court was leaning in their favour on the broader legal challenge. (Guardian)

The research arm of Malaysian investment bank CIMB says that it objects to French and Russian proposals to impose additional taxes on palm oil, as they will make the commodity less competitive against other competing oils. The Russian government is considering imposing an excise tax on palm oil and soda drinks to help balance its budget, and reduce the consumption of products it considers unhealthy, while the French government is planning to impose an environmental tax on palm oil based products in order to tackle deforestation. CIMB argues that Indonesia has already adopted Sustainable Palm Oil standards, that the use of dangerous pesticides has stopped and that health scare claims are untrue. The research house added the objections are premised on France, Denmark, Britain, Germany and the Netherlands being signatories to the Amsterdam agreement that supports sustainable palm oil production practices, and that the tax is discriminatory under international trading rules. (The Edge Markets)

A local court in Tainan, Taiwan has ruled on Tuesday to take into custody the developer of a building which collapsed during an earthquake at the weekend that killed at least 39 people. The developer and management team members are being held without bail on suspicion of negligent homicide while the authorities finish their investigation, the Tainan District Court said in a statement. The quake struck at the beginning of the Lunar New Year holiday, with almost all of the dead found in Tainan’s toppled Wei-guan Golden Dragon Building. Questions have been raised about the building’s construction quality, especially materials used to build it. Reuters witnesses at the scene of the collapse saw large rectangular, commercial cans of cooking-oil packed inside wall cavities exposed by the damage, apparently having been used as building material. Taiwan media has also reported the presence of polystyrene in supporting beams, mixed in with concrete. (Reuters)