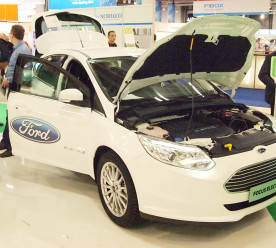 ABP, a Dutch pension fund and one of the world’s largest funds, said it will review its entire investment portfolio of stock and bonds by 2020, and divest from companies that don’t at least try to meet “sustainability” criteria. ABP, which had 356 billion euros in assets under management at the end of the second quarter, described the change as a major shift in investing philosophy that would apply to more than 4,000 companies it owns stakes in. A spokesperson said that to remain investable for ABP, companies would have to cut their carbon dioxide emissions by 25 percent in 2020 from the level emitted at the end of 2016. “Investments that contribute to the solution of societal problems will be doubled by 2020, to 58 billion euros,” the fund said in a statement. ABP’s chair, Corien Wortmann-Kool, said the company believed the shift in philosophy would “create the most value in the long term” for fund participants. (Reuters)

Ford is set to expand its network of workplace stations for employees in the USA to charge their plug-in electric vehicles. The automaker installed the first workplace charging station in September 2014, and now has 143 units available at 43 of its sites in the US and Canada. Ford says twenty more are currently in the works, and it hopes to install higher numbers across the region in the long term. The stations have to date resulted in 6,000 gallons of petrol being saved, according to the company, and are used by around 350 Ford employees. “Providing a charging network at Ford facilities not only benefits our employees, but builds upon our commitment to the electrification program and developing environmentally conscious vehicles,” said Cynthia Williams, associate director of environmental and regulatory planning for the company, in a statement. “Ford is striving to deliver quality products and sustainable manufacturing, and to make eco-conscious vehicles easier to use.” (Business Green)

A new report reveals that the Rajasthani sandstone sector relies on child labour and urges businesses and the government to take action. According to the report released by children’s charity Unicef UK, 38 percent of children surveyed in the Indian state of Rajasthan work in sandstone quarries. The study, which surveyed 100 households in the heart of India’s sandstone industry, reveals that most children are employed making cobblestones or chiselling stones. “We believe that these findings are representative of problems across the sector,” said Kate Goldman, director of partnerships and philanthropy at Unicef UK. Unicef is calling on the sector to urgently formalise its practices and procedures, and offer meaningful guarantees against dangerous child labour. The report lays out an ambitious set of recommendations, including stronger children protection measures from all levels of the government as well as a voluntary sustainability standard within the sandstone industry. (The Guardian)

The Antarctic Ocean Alliance, a coalition of over 30 NGOs, has called on the 25 member countries gathering for the annual meeting of the Commission for the Conservation of Antarctic Marine Living Resources (CCAMLR) to finally agree on lasting and significant Southern Ocean protection. CCAMLR previously pledged to establish two marine protected areas (MPA) by 2012, but member states have failed to reach agreement on two major proposals on four separate occasions. Since they were introduced, several significant compromises have been negotiated among CCAMLR members, including reduction in the size of the protected areas. A joint proposal of the United States and New Zealand to designate a Ross Sea MPA of 1.25 million square kilometres—with 1.14 million square kilometres proposed as “no take”—has been under consideration since 2011. Likewise, Australia, France and the EU are once again proposing the creation of an MPA to protect 946,998 square kilometres of East Antarctic waters that has been under consideration since 2010. (Blue and Green Tomorrow)

Biotechnology group Monsanto is facing trouble in India, where a clutch of local seed-makers are refusing to pay royalties for using the US company’s gene technology to produce seeds for pest-resistant cotton. Monsanto said its local Indian joint venture, Mahyco Monsanto Biotech (MMB), is owed $65 million in unpaid royalties from nine Indian seed companies that used Monsanto’s Bollgard (Bt) gene, which makes cotton that is resistant to bollworms. The companies, which together sell nearly 60 percent of India’s cotton seed, have blamed their inability to pay on the government price controls on Bt cotton seeds, and an 11 percent cut in cotton seed prices in Maharahstra, a major cotton growing state, in June. MMB, which is half owned by Monsanto and licenses the Bollgard gene to Indian seed companies, has petitioned the Bombay High Court to force the defaulters to pay up. It has also warned the payment dispute could deter Monsanto from introducing other advanced seeds technology into India. (FT)*