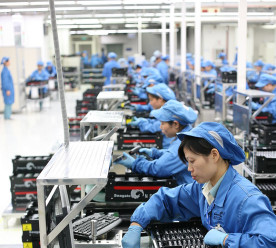 Over the past week, pledges and calls for action have been submitted major industries as time draws nearer to the UN Climate Summit in December. In an open letter to world governments, the airline industry reaffirms its commitment to reduce “aviation’s contribution to climate change.” Signatories represent more than 90 percent of the world’s airlines. Meanwhile, 10 of the world’s largest food companies, including General Mills, Unilever, Kellogg and Nestlé, published an open letter urging world governments to support a global climate agreement that “meaningfully addresses the reality of climate change.” Six US banks – Bank of America, Citi, Goldman Sachs, JPMorgan Chase, Morgan Stanley and Wells Fargo – issued a joint statement: “As major financial institutions, working with clients and customers around the globe, we have the business opportunity to build a more sustainable, low-carbon economy.” The power industry has seen the Global Sustainable Electricity Partnership – which delivered about a third of the world’s electricity last year – issuing an open letter that points to core policies that can “foster the innovation and investment required to meet ambitious climate and energy goals.” (Sustainable Business)

Report: Carbon pricing has growing support, now is the time to expand it

A new working paper from the Global Commission on the Economy and Climate, Implementing effective carbon pricing, aims to show that carbon pricing works and doesn’t harm the economy. The paper shows that around 40 national jurisdictions and over 20 cities, states and regions, have adopted or are planning explicit carbon prices, covering about 12% of global GHG emissions, although prices vary significantly. Meanwhile, over 1,000 major companies and investors have endorsed carbon pricing, and around 450 now use an internal carbon price to guide investment decisions, up from 150 companies in 2014. The paper urges developed and emerging economies, with the G20 in the lead, to commit to introducing carbon prices of roughly comparable levels by 2020. “The world economy is undergoing a remarkable period of transition, and we need to act now to avoid locking ourselves into unsustainable development patterns,” said Lord Nicholas Stern, Co-Chair of the Global Commission.  (Blue and Green Tomorrow)

Bolsa de Santiago (Santiago Exchange) and S&P Dow Jones Indices (S&P DJI) have announced the launch of the first sustainability index in Chile. The Dow Jones Sustainability Chile Index is the first of its kind in Chile using RobecoSAM‘s DJSI methodology. It consists of 12 companies that fulfill certain sustainability criteria better than the majority of their peers within a given industry. These companies include Cencosud, CorpBanca, Falabella, Sigdo Koppers and Viña Concha y Toro. Next year, the studied universe of Santiago Exchange issuers will broaden from the 40 companies that compose the IPSA Index to the 60 most traded companies in Chile. “Via this index, the Santiago Exchange seeks to maintain its leadership position in promoting responsible investment,” says José Antonio Martínez, CEO of Santiago Exchange. “The companies within the Dow Jones Sustainability Chile Index have not only incorporated sustainable processes into their business, but are also creating value for their shareholders.” (PR Newswire)

HP and Dell suspend use of interns in Chinese factories

According to an investigation released this week by DanWatch, a Danish human rights research group, thousands of Chinese students are sent by their schools to the assembly lines of some of the world’s biggest electronics manufacturers in China to make servers that will most likely end up at European universities. The investigation took DanWatch to the assembly lines of Wistron Corporation in Zhongshan, which manufactures servers for HP, Dell and Lenovo. It found Chinese students working against their will – they won’t graduate otherwise – often between 10 to 12 hours a day for up to five months. “These conditions violate the Chinese labour contract, as well as the standards on internships set by the Chinese ministry of education. Furthermore the forced internships violate the International Labour Organisation’s (ILO) convention on forced labour,” the report reads. HP and Dell replied to DanWatch and sent unannounced independent auditors to the factory almost immediately. Although denying claims of forced labour, they did acknowledge “concerns” at Wistron’s plant, including students working overtime and night shifts. (Guardian)

Nearly two-thirds of the top 71 Silicon Valley investment funds have no women as senior investment team members, according to data compiled by the Social and Capital Partnership and The Information, a tech news site. Roughly 30 percent of those funds have a senior investment team that is composed entirely of white members. The data highlights the large gap between Silicon Valley’s diversity ambitions and reality, especially among senior partners. Just one venture capital firm with assets of more than $1 billion, Google Ventures, has a black senior investing partner. And only four have Hispanic partners. The age of the investing partners is also on the higher side, with the average age of the biggest venture firms solidly in the mid-40s. “The bottom line is that the [venture capital] community is an increasingly predictable and look-alike bunch that just seems to follow each other around from one trivial idea to another,” Chamath Palihapitiya, the founder of Social Capital, wrote. “My conclusion is that we need to improve the decision making or change the decision makers within our industry.” (NY Times)