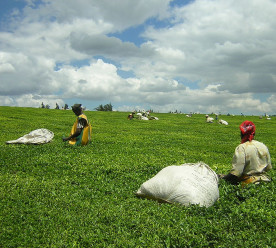 Global food giants and international NGOs have drafted a new framework to prevent land grabs. The voluntary guidelines on responsible land acquisition, drafted by senior figures from Nestlé, Unilever, Coca-Cola, Oxfam, Global Witness and other large firms and international organisations, were released on Monday. The framework is designed to make it easier for companies to comply with guidance on buying land in areas where legal systems and formal documentation over who controls territory are often murky. Unilever has confirmed it is “developing a new Global Land Rights Policy” which it will publish later this year.

Corporations have faced “reputational risks” from activists campaigning against land grabs, said Rodney Schmidt, deputy director of the Rights and Resources Initiative, one of the NGOs backing the new guidelines. Companies are “realising they have a competitive edge if they address potential social conflicts around tenure issues upfront,” while “indigenous people and local communities are becoming more aware that they have rights under national and international legislation,” he said. But critics, such as the Oakland Institute, say that voluntary initiatives “leave communities vulnerable to the ‘good will’ of corporations at best”. (Reuters)

Staff at Amazon’s UK operation have developed physical and mental illnesses because of the “regimes” they work under, the GMB trade union has warned. Employees at the online retailer’s distribution centres across the UK were under pressure to be an “above-average Amazon robot”, said the GMB’s lead officer for Amazon, Elly Baker. Baker’s comments follow a New York Times article that alleged employee cruelty at Amazon’s corporate headquarters in Seattle. Baker said: “It’s hard, physical work, but the constant stress of being monitored and never being able to drop below a certain level of performance is harsh. You can’t be a normal person. You have to be an above-average Amazon robot all the time.” Baker said some employees were suffering from musculoskeletal problems, work-related stress and anxiety. (The Guardian)

Islamic leaders have issued a clarion call to 1.6 billion Muslims around the world to work towards phasing out greenhouse gas emissions by 2050 and a 100 percent renewable energy strategy. The grand muftis of Lebanon and Uganda endorsed the Islamic declaration on climate change, along with prominent Islamic scholars and teachers from 20 countries, at a symposium in Istanbul. Their collective statement makes several detailed political demands likely to increase pressure on Gulf States ahead of the Paris climate summit in December. “We particularly call on the well-off nations and oil-producing states to lead the way in phasing out their greenhouse gas emissions as early as possible,” says the statement, and bids for “generous financial and technical support” to help wean poorer countries off of fossil fuels. (The Guardian)

The Obama administration on Tuesday proposed the first federal regulations requiring the nation’s oil and gas industry to cut emissions of methane as part of an expanding and increasingly aggressive effort to combat climate change. In a conference call with reporters, the Environmental Protection Agency’s acting assistant administrator, Janet McCabe, said the rules were designed to ensure that oil and gas companies reduced waste and sold more gas that would otherwise be lost, while protecting the climate and the health of the public. The new rules, which were widely expected, are part of a broad plan by the Obama administration to cut emissions of planet-warming gases from different sectors of the economy. (NY Times)

The number of women gaining places at UK universities is rising twice as quickly as that for men, marking a growing gender divide. The admissions service, UCAS, has released data five days after A-level results, showing more than 463,000 places have been confirmed. This is a 3 percent increase on the same point last year – with a 4 percent increase among women and 2 percent increase among men. So far this year, 57,000 more women than men have gained university places. The trend is heading towards a record number of students beginning full-time undergraduate courses this autumn. The admissions figures also show the gender gap will be wider than ever. Among UK 18-year-olds, 25.1 percent of men and 34 percent of women have taken university places. (BBC)