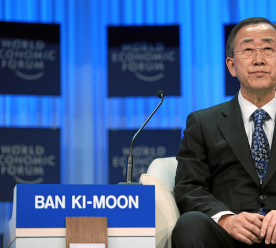 Topshop has pieced together some of the fabric remnants leftover when its clothes are made, to create its first ever standalone sustainable fashion range. The new ‘Reclaim range’ is a capsule collection made up of 20 pieces created out of the high-street brand’s existing stock of jersey, cotton and denim off-cuts. Everything in the range costs between £12 to £65. It’s not the first time the brand has dipped its toes into the ethical fashion pool. It has previously collaborated with ‘Reclaim to Wear’, the company launched by the founders of From Somewhere, a label that works to tackle the problem of textile waste. (Huffington Post UK)

Countries agreed this week on a series of bold measures to overhaul global finance practices and generate investments for tackling a range of economic, social and environmental challenges. Talks took place at the United Nations Third International Conference on Financing for Development, being held in Addis Ababa, Ethiopia. “This agreement is a critical step forward in building a sustainable future for all. It provides a global framework for financing sustainable development,” UN Secretary-General Ban Ki-moon said after negotiators reached the deal at the Conference, which has been running in the Ethiopian capital since Monday, 13 July. Financing is considered the linchpin for the success of the post-2015 sustainable development agenda, which will be driven by the implementation of 17 goals. (Eco-Business)

Majority of women do not believe they face discrimination at work

The majority of women feel their workplace treats them fairly, according to research from the Great Place to Work Institute. Its report “Women at work: is it still a man’s world?” claims that, despite official reports of discrimination in pay and promotion, most women accept their work situation and do not feel worse off because of their gender. It also found no evidence to support the argument that women lose out on senior roles because they take time out to raise a family, with senior men and women actually demonstrating similar lengths of service (although this time would have included any periods of maternity leave). Marianna Roach, author of the report and Great Place to Work head of research, said: “Employers need to pay closer attention to the specific differences between men and women’s experiences, rather than just focusing on the overall results.” (Personnel Today)

A major new Pew Research Center study this week found that Americans and Europeans are only moderately worried about climate change while those in more vulnerable regions — Latin America, Africa, and Asia — expressed much higher levels of concern. While climate change was at the top of the charts in many regions — primarily Latin America (61 percent) and Africa (59 percent) — ISIS was the main concern in a number of developed countries, including the United States, Canada, France, Spain, Italy, Japan, Germany, the U.K., and Australia. All in all, the study found that the majority of the populations in 19 countries believe that climate change is the top global threat, and regions especially vulnerable to the effects of climate change expressed the most concern. (Climate Progress)

International coffee chain Costa Coffee is to build a new eco-friendly roastery in Basildon, it announced yesterday, in order to cope with growing demand. The coffee giant, which recently opened its first “zero energy” coffee shop, said it plans to repurpose an old automotive plant and turn it into a new roastery capable of securing the Building Research Establishment Environmental Assessment Methodology’s (BREEAM) “Outstanding” accreditation. The company said it will revamp the old factory by installing rooftop solar photovoltaic (PV) panels, and a rainwater harvesting system to recycle water, in a bid to make the building’s structure “zero energy”. The investment is part of parent company Whitbread’s wide-ranging sustainability strategy, which aims to cut greenhouse gas emissions 15 per cent from its 2014/15 baseline by 2020. (Business Green)