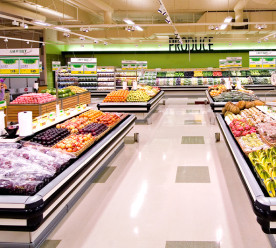 Global food prices, which have been rising since 2012, may be ready for another hike, claims a report published yesterday by sustainable business consortium Ceres. According to the report, most food companies aren’t prepared to deal with the water risks that it expects will lead to higher water and food prices. The report ranked 37 companies on their water management, based on publicly-available information. On a scale of zero to 100, 31 companies ranked lower than 50. Food giant Kraft Foods scored a mere six points whilst Tyson Foods got eight. Meanwhile, Unilever scored the highest at 70, followed by 67 for Coca-Cola, 64 for Nestlé and 57 for General Mills. The report also recommends several things the industry can do to improve, including tracking water use in their supply chains, and offering incentives for sustainable water management. Kellogg’s chief sustainability officer, Diane Holdorf, praised the report for raising awareness about the challenges companies face. (Guardian)

The Singapore Exchange (SGX) is seeking public feedback on a plan to make listed companies follow sustainability reporting guidelines. “Expanding the coverage of reporting to include environmental and social aspects of businesses will further enhance disclosure and transparency to investors,” the market operator said in a statement. The exchange expects to submit changes to the listing rules and a reviewed version of its existing sustainability guidelines by the end of 2015, with implementation targeted for 2017. SGX said that it will begin consultation this month with a survey of listed companies and a series of focus-group engagements to understand current practices and the readiness of listed companies. The exchange will then seek feedback on its existing guidelines on sustainability reporting from institutional investors and sustainability professionals. Finally, SGX will carry out a public consultation to gather views from all stakeholders, including the investing public. (Business Times)

Aditya Birla, the world’s largest producer of viscose fibres, better known as rayon, has announced it will no longer source from ancient and endangered forests. The company’s new fibre sourcing policy states that the company will “implement its best efforts” to avoid sourcing and trading wood fibre that has been harvested illegally, in violation of civil rights, from uncertified high conservation value forests, from plantations, and harvested from ancient and endangered forests. “We’re committed to avoiding any endangered forest fibre in our products and are excited to help drive innovation in the development of fabrics made from new fibres that reduce the pressure on the world’s natural forests”, said Kumar Mangalam Birla, Chairman of the Aditya Birla Group, in a statement. Aditya Birla worked with Canopy, a forestry nonprofit, to develop the sourcing guidelines. Canopy collaborates with 700+ companies on timber sourcing policies. (Triple Pundit)

Whitbread, the parent company of Costa and Premier Inn, has announced a new set of sustainability targets for 2020, strengthening its carbon emission reduction goals. The company has already exceeded targets set out under its Good Together sustainability strategy in 2009, which required it to reduce carbon emissions and water consumption by a quarter by 2017. According to new plans announced on Thursday, the company wants to reduce carbon by a further 15% and water by 20% against a 2014 baseline, while bumping recycling rates to 80%. The company also announced a new commitment to greening its supply chain with a target to achieve 100% accredited supply for ten critical product sourced commodities (cocoa, coffee, cotton, fish, meat, palm oil, soy, sugar, tea and timber).  Successes so far have been driven by investments in renewables and energy efficiency.  (Edie; Business Green)

Avoiding a power blackout will be one of the first priorities for whoever forms the next UK government, Simon Virley, UK chair of energy and natural resources at KPMG has suggested. Ahead of the election results, Virley has warned of tight energy capacity in 2015 and 2016. “The next couple of winters are expected to be among the tightest this decade in terms of electricity capacity margins due to announced plant closures; while Britain’s overall dependence on imported energy is soaring as North Sea production declines,” he said. Blackouts have been a persistent concern for UK business. Last year National Grid was forced to take measures to keep more power generation in reserve. Some critics argue that focus on renewables has left Britain’s power network now dangerously short of spare capacity. Official figures show that renewables generated 19.2 percent of UK supplies in 2014, with solar contributing 1.2 percent.  (The Telegraph)