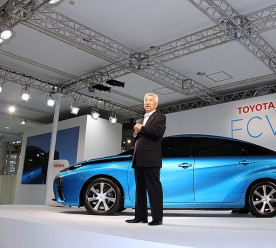 The UK government has provided well over a billion pounds in loans to fossil fuel projects around the world, despite a pledge to withdraw financial support from such schemes, according to environmental group Greenpeace. Gazprom in Russia, Brazil’s state-owned oil company and petrochemical companies in Saudi Arabia are among the companies who have benefited from around £1.7 billion in government funding since 2010. Will McCallum, policy adviser at Greenpeace UK, said: “The loophole allowing UK Export Finance to continue funding highly polluting infrastructure, and the extraction of fuels we urgently need to leave in the ground, is one that must be closed if the government is to honour its international commitment to a 2°C limit.” A spokeswoman for UKEF said it reviewed environmental and social issues before approving financing, but that demand for investment in renewables was low. (The Guardian)

The OpenLabel Project, currently in beta, aims to bring radical transparency to everyday products through its labelling system, which allows both individuals and organisations to attach their own labels to a product using the barcode. Instead of relying solely on the information available on the manufacturer’s label, the app allows users to share their own thoughts on any product, empowering consumers to make more informed choices when shopping. OpenLabel says “Our dollars are our most powerful voice. By creating a centralised place for people and organizations to share environmental, political, social, animal, and health & safety information, the OpenLabel Project will make commerce more transparent, and help consumers make smarter, more responsible choices.” (Treehugger)

Following the footsteps of fellow automaker Tesla, Toyota has said it will share its 5,680 patents related to its fuel-cell cars for free in a bid to promote hydrogen-powered vehicle technology. This is the first time the Japanese carmaker has released patents to competitors without charging a royalty fee, underscoring the challenges Toyota and other companies face in furthering the mass adoption of fuel-cell technology. “One car company alone cannot create a hydrogen society. It needs to be a worldwide effort,” Toyota president Akio Toyoda told reporters on Tuesday. While Toyota’s move risks compromising its technological edge, Masahiro Akita, auto analyst at Credit Suisse, said the need for an industry-wide effort to expand the infrastructure for FCVs outweighed the demerits. “There’s no point to maintaining a technological lead if the market doesn’t spread,” Mr Akita said. (Financial Times*)

In what is being called the world’s largest street lighting upgrade to date, Dutch technology company Philips has provided the government of the City of Madrid with 225,000 new energy-efficient lights and connected LEDs, renewing its entire street lighting system to support its ambition of becoming a Smart City. Philips says the new lighting, which will save 44 percent in energy costs, will quickly pay for itself, providing Madrid with high-quality, ultra-efficient street lighting for a brighter, safer and smarter city at no additional cost to its citizens. “The new lighting installation allows us to make significant progress towards becoming a smart city, which is more sustainable and, in conclusion, a more liveable city” said Madrid mayor Ana Botella. (Sustainable Brands)

The value of global carbon markets is set to near €70 billion this year after strong growth in 2014, according to a major new analysis. Point Carbon at Thomson Reuters says a 15 per cent rise saw the global carbon market hit €45 billion on the back of higher prices in Europe and North America, and it now expects a further rise to €69.6 billion during 2015: a 55 per cent increase.  While the EU Emissions Trading Scheme will remain the world’s largest carbon market, the strongest growth is expected in Asia: Point Carbon estimates China’ seven schemes could be worth €146 million this year. Meanwhile, South Korea’s trading system is forecast to hit €360 million in its first year of operation. However, with permit prices still well short of the €40 to €50 mark experts say is needed to drive large scale low carbon investments, governments will be under pressure to implement measures to deliver a more credible carbon price. (Business Green)