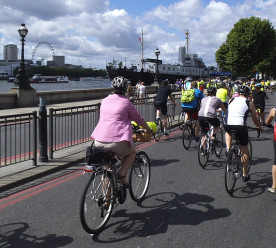 World’s biggest investors call for a price on carbon

Many of the world’s largest institutional investors have sent a letter calling on world leaders to aggressively act on climate change. 340 global investment managers issued the statement, representing $24 trillion in assets – up from the $13 trillion attached to a similar letter in 2009 before the Copenhagen summit. Signatories include BlackRock, Calvert Investments, BNP Paribas Investment Partners, Standard Bank, CalPERS, PensionDanmark and Deutsche Bank.  The investors are calling for a “stable, reliable, economically meaningful” price on carbon – either through a tax or cap-and-trade – that “helps redirect investment commensurate with the scale of the climate change challenge.” The letter argues that investments are critical, pointing to the minimum of $1 trillion a year (until 2050) that is necessary to limit temperature rise to 2 degrees C, according to the International Energy Agency. Currently, just $254 billion is being invested per year. (Sustainable Business)

Google Chairman Eric Schmidt has said that the world’s biggest Internet search company made a mistake in funding a political group that opposes US action on climate change. Schmidt said Google paid the American Legislative Exchange Council (ALEC) about $10,000 a year as part of a lobbying campaign on an unrelated issue. The ALEC group has written model legislation calling for an interstate research council to study possible beneficial effects of climate change and to examine how regulations capping carbon may hurt the economy. “The people who oppose it are really hurting our children and grandchildren and making the world a much worse place,” Schmidt said on NPR’s “Diane Rehm Show”. Google confirmed in a statement that it will not renew its ALEC membership at the end of the year. (Bloomberg)

Carbon dioxide emissions from urban transportation could be reduced by 40 percent by 2050 – eliminating an estimated 1,700 megatons of CO2 emissions per year – by expanding public transportation, cycling and walking in cities, according to a report from the Institute for Transportation and Development Policy (ITDP) and the University of California, Davis. At a time when public services are being cut, expanding public transportation, cycling and walking in cities could save over $100 trillion in cumulative public and private spending. The report – A Global High Shift Scenario – highlights that the findings are relevant to three concurrent policy issues societies and leaders worldwide are grappling with: how best to promote and invest in climate change action; how to advance equitable, environmentally sustainable economic and social development; and how to cope with unprecedented urbanization. (Triple Pundit)

The R Cert is a new consumer-facing recycled textile clothing standard that educates and verifies to consumers that a brand recycled their own pre-consumer textile waste into clothing, using a minimum of 20 per cent recycled fibres. Consumers can track their recycled textile garment’s journey from factory to retail by scanning a QR code on the garment’s hangtag or through www.rcert.org to discover the recycling process and the environmental savings achieved through this type of recycled textile clothing. The standard has been released alongside the Recycled Collection by clothing retailer Esprit. “This collection represents a small but significant step in our continued move back to our original brand roots of providing sustainable fashion options to our consumers,” said Josep Sabate, Head of Global Quality Management & Sustainability, Esprit. (Eco-Business)

Liberia to stop deforestation in return for development aid

Norway has agreed to pay Liberia 150 million dollars to stop deforestation by 2020. Under the terms of the agreement, Norway will help Liberia to initially build up the capacity to monitor and police its forests. Liberia will refrain from issuing any new logging concessions until all existing ones have been reviewed by an independent body. The country agrees to place 30% or more of its forest estate under protected area status by 2020. It will also pilot direct payments to communities for protecting the forest. Ultimately the Norwegians will pay for results, based upon independent verification that trees remain standing. With the current Ebola outbreak having a significant economic impact on the country, the Norwegian deal is timely. “This partnership holds promise not only for the forest and climate; but for forest communities that have been marginalized for generations,” said Silas Siakor, a Liberian environmental campaigner and Goldman Environmental Prize laureate. (BBC)