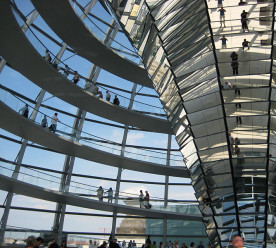 Germany is the world’s most energy efficient country with strong codes on buildings while China is quickly stepping up its own efforts, according to a study of 16 major economies by the Washington-based American Council for an Energy-Efficient Economy. The council gave Germany the top score as it credited Europe’s largest economy for its mandatory codes on residential and commercial buildings. The study ranked Italy second, pointing to its efficiency in transportation, and ranked the European Union as a whole third. China and France were tied for fourth place, followed by Britain and Japan. The study ranked Mexico last and voiced concern about the pace of efforts by the United States and Australia. “We all agree , I think – the cheapest energy is the energy you don’t have to produce in the first place,” said Philipp Ackermann, the deputy chief of mission at the German embassy. “Our long-term goal is to fully decouple economic growth from energy use.” (Yahoo News)

Targeted efforts to make food systems more efficient in key parts of the world could meet the basic calorie needs of 3 billion extra people and reduce the environmental footprint of agriculture without using additional land and water, researchers have said. Researchers from the University of Minnesota looked at 17 key crops that produce 86 percent of the world’s crop calories and account for most irrigation and fertiliser consumption, including rice, wheat and corn. The biggest opportunities for boosting food production lie in Africa, they suggested, while initiatives to make agriculture more sustainable should focus on six countries – China, India, the United States, Brazil, Indonesia and Pakistan – as well as Europe. Their main recommendations are to produce more food on existing farmland by increasing yields, reduce greenhouse gas emissions from agriculture, use less nutrients and water to grow crops, feed fewer crops to animals as fodder, and cut food waste. (Reuters)

Call for US tax change hits shares in Shire

Fresh calls for a US crackdown on so-called tax inversion have hit shares in British pharmaceutical firm Shire, which is trying to hammer out a £31bn deal with US suitor AbbVie. Similar to Pfizer’s recent failed attempt to buy AstraZeneca, AbbVie wants to shift its tax base from the US to Britain as part of the deal, a move that would cut its effective corporation tax rate from 22% to 13% by 2016. Over the last decade around 50 US firms have reincorporated overseas through inversion, moves which have divided Republican and Democratic US law makers. The US treasury secretary, Jacob Lew, has urged the leaders of the congressional tax-writing committees to act now to stop US firms redomiciling for tax purposes.  He wrote: “Congress should enact legislation immediately – and make it retroactive to May 2014 – to shut down this abuse of our tax system.” (The Guardian)

Recent predictions by the Climate Bonds Initiative forecast a $40 billion increase in green bond issuance. Established in 2010 to promote investments that combat climate change, the non-profit organisation predicts a rapid increase in this sector. Green bonds fund environmentally friendly projects and the CBI believes that “mobilising bond markets as a low-cost financing tool will be essential for the realisation of a low carbon and climate resilient economy”. The market has also received a further boost this year following the publication of Green Bond Principles, a framework of voluntary guidelines which reduce the risk of bond allocation to assets that have scarce environmental value. Sean Kidney, chief executive of the Climate Bonds Initiative, said: “Investors are concerned about climate change… The investment opportunities we find are safe and secure investment grade bonds. This is a Dull Green Market – just how pension funds and insurance funds like it.” (Financial Times*)

Universities and colleges across the UK have signed an agreement with the United Nations Environment Programme (UNEP) to encourage sustainable innovation among future generations. The partnership will bring together members of the Environmental Association for Universities and Colleges (EAUC) and the UNEP’s Global Universities Partnership on Environment and Sustainability as part of a three-year agreement. The network will work on improving environmental education, training and networking to increase sharing of ideas and an understanding of what sustainability means across the globe. The partnership will also expand the EAUC’s Green Gown Awards – which recognise British universities sustainability initiatives – further across the globe, with an emphasis on profiling and fact sharing with the Southern Hemisphere. (Edie)