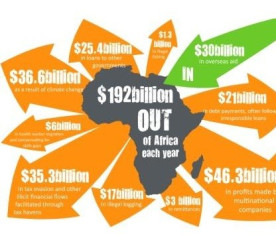 The Global South is being drained of resources by the rest of the world and it is losing far more each year than it gains, according to a new report. Health Poverty Action, alongside a number of other UK and African NGOs, has released what it says is the first attempt to calculate Africa’s losses across areas including “illicit financial flows; profits taken out of the continent by multinational companies; debt repayments; brain drain of skilled workers; illegal logging and fishing and the costs incurred as a result of climate change”.

According to the report, these factors together sum to $192 billion every year – almost six and a half times the total amount of aid given to the continent. Even accounting for other inflows such as foreign investment and remittances, the report says that Africa still suffers an overall loss of $58 billion every year. “These figures expose the gross misconceptions about aid and ‘charity’”, said Martin Drewry, Director of Health Poverty Action. “We need to move beyond our focus on aid levels and communicate the bigger truth – exposing the real relationship between rich and poor and holding leaders to account.” (Health Poverty Action)

The leaders of the five Brics countries have signed a deal to create a new $100bn development bank and emergency reserve fund. The New Development Bank, as it will be called, is intended to finance infrastructure projects in the founding members of Brazil, Russia, India, China and South Africa, as well as other emerging-market countries. Competing directly with the World Bank and International Monetary Fund (IMF), the new bank will have a headquarters in Shanghai, China and the first president for the bank will come from India. The Brics have been trying for years to reform the IMF and World Bank to give emerging markets more influence, but with little success. “There will be a very powerful means to prevent new economic difficulties in the world scenario and creating the bank will also establish the basis for huge macroeconomic changes,” Russian President Vladimir Putin said. The bank “will allow us to undertake joint plans regarding our development.” (BBC News; Wall Street Journal)

According to a recent Fortune study, the number of women CEOs in the Fortune 500 is at its highest total yet at 24 (51 in the Fortune 1,000). Fortune reports that while just 5 percent of Fortune 1,000 companies have female CEOs, they are responsible for 7 percent of the total Fortune 1,000 revenue. The biggest woman-led company is General Motors (Mary Barra) coming in at No. 7 on the 2014 Fortune 500 List. The number of women CEOs has risen extremely slowly in the past decade, and the number of women on boards has stagnated, despite evidence that women-led companies fare better and that women make good leaders. According to Ilene H. Lang, president & CEO of the non-profit organisation for Catalyst, “Diverse business leadership and governance are correlated with stronger business performance, employee engagement and innovation. Shareholders beware: A company with no women at the top is missing one of the biggest opportunities in the marketplace today.” (Triple Pundit)

Australia’s carbon price has been repealed, leaving the nation with no legislated policy to achieve even the minimum 5% greenhouse emissions reduction target it has inscribed in international agreements. After eight years of bitter political debate, during which climate policy dominated three election campaigns, prime minister Tony Abbott announced via a media conference: “You voted to scrap the tax and today the parliament finally listened.” The government said it would now achieve the 5% target through its as-yet-unlegislated Direct Action competitive grants policy, which the environment minister, Greg Hunt, insisted was a “policy for the long term”. The opposition leader, Bill Shorten, said Labor’s climate policy for the next election would include an emissions trading scheme and accused Abbott of “sleepwalking Australia towards an environmental and economic disaster”. (The Guardian)

Aid group Oxfam has called on other rich nations to follow the example of Germany, which has promised €750 million for the U.N.’s fledgling Green Climate Fund. “This announcement ends the deafening silence we’ve had so far around the empty Green Climate Fund that is supposed to support poor countries in the battle against climate change. Now others must follow suit,” Oxfam Germany’s Jan Kowalzig said. “If rich countries such as the US, France, the UK, Japan and others manage to collect at least $15 billion in pledges ahead of the upcoming U.N. climate negotiations in Lima at the end of the year, this could give the talks a significant boost,” he added in a statement. The fund aims to help poor nations pursue clean development and adapt to climate change impacts, including floods, droughts, heatwaves and rising sea levels. It is regarded as a key part of the puzzle in securing a new global deal to tackle climate change due to be agreed in Paris in late 2015. (Reuters)