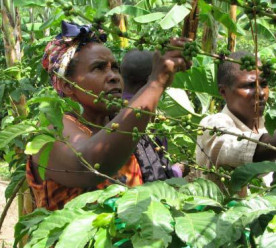 Fairtrade accused of failing to deliver benefits to African farmworkers

Sales of Fairtrade-certified products from Uganda and Ethiopia are not benefiting poor farmworkers, according to a groundbreaking study. Fairtrade organisations worldwide are committed to “better prices, decent working conditions, local sustainability and fair terms of trade” through a minimum price as well as a “social premium” paid to groups of smallholder farmers. But a UK government-sponsored study, which investigated the production of flowers, coffee and tea in Ethiopia and Uganda, found that wages were higher on farms that were larger, commercial and not Fairtrade-certified. Even comparing different smallholder sites, wages were generally lower in the areas dominated by Fairtrade producer organisations. The authors said a combination of idealism and naivety could explain the findings. “One possibility is that Fairtrade producer organisations are always established in significantly poorer, more marginalised areas,” they said, adding that Fairtrade operated on the “remarkably naïve assumption” that subsidies to smallholder groups were distributed evenly among members. Fairtrade International said the report’s conclusions were based on “unfair and distorted comparisons between farms and organisations of dramatically different size, nature and means”.  (The Guardian)

IBM to provide improved access to life-saving drugs in Zambia

IBM has announced a partnership with the Zambian Ministry of Health to provide citizens with improved access to 200 life-saving drugs. Supported by the World Bank, the UK Department for International Development, UNICEF and London Business School, IBM will support Zambia’s Medical Stores Limited (MSL) to deploy a new pilot project to better manage medicine inventory and delivery. Using the IBM SPSS medicine supply forecast model, which takes into account local conditions such as the local rainy season and differences in each district’s demographics, MSL will be able to determine optimised distribution of drugs across an initial 2,190 health centres. The public health sector in Zambia registers 100,000 deaths annually due to preventable and treatable diseases, IBM says. The goal of the medicine supply chain management project is to save more lives by making medicine widely available when and where it is needed. The solution will provide a real-time view of drug usage and stock while analysing data to identify trends and forecasts to prevent gaps in the medical supply chain. (Sustainable Brands)

The UN funding vehicle for helping developing nations tackle climate change has set a November goal to receive its first round of cash pledges, a move hailed as a major step towards a global pact in 2015. The 24-strong board of the Green Climate Fund, set up to help channel at least $100 billion a year by 2020 from governments and the private sector, set a loose deadline after agreeing several procedural steps during four days of talks in Songdo, South Korea. Starting money flowing towards schemes such as building solar power plants or deploying flood management systems is seen as crucial to getting over 130 developing nations to sign a UN climate pact in late 2015. But rich nations such as those in the European Union, Japan and the United States had been reluctant to donate without clear rules to ensure the cash would be spent wisely. Environmental campaigners and investor groups said this week’s meeting put the fund on track to receive money ahead of December’s UN climate talks in Lima, Peru and to start deploying cash by early next year. (Reuters)

The UK’s green building supply chain could be in line for a £200 million boost following a deal to establish a new training and R&D centre in the Chinese city of Shenzhen. UK construction firm Building Research Establishment (BRE) has signed an agreement with the Shenzhen Municipal Government to set up the facility in China’s fastest growing city. The centre in Shenzhen will deliver training on a national scale to other cities and promote other services, including certifying buildings to green construction standards, the government-backed UK Trade & Investment (UKTI) said in a statement. BRE has identified huge potential for growth in the Chinese green building market, which is still in its infancy but is likely to be spurred by a Chinese government goal of having green buildings account for 30 per cent of new construction projects by 2020. BRE China aims to certify over 1,000 buildings across the country to its standards, which UKTI said would generate income of around £10 million and could create up to £200 million of work for UK supply chain companies. (Business Green)

Onshore wind is now the cheapest of any new utility-scale technology, according to Energias de Portugal (EDP), one of Europe’s major electricity operators. EDP has around 24GW of generation, with equal exposure to fossil fuels, wind, and hydro. In a recent presentation to analysts, EDP’s head of renewables Joao Manso Neto said that the “levelised cost of electricity” of onshore wind in Europe is 20 per cent cheaper than gas and one third cheaper than coal. He said wind energy is also cheaper than gas in key emerging markets such as Brazil, South Africa, Mexico, and major Asian markets, and suggested that the cost difference is even greater in the US. “It is clear, more and more, that our product (wind energy) is good, not just because it is green, but because it is cheaper,” Neto told the analysts. He diplomatically explained that for people “less educated” in the economics of electricity, wind might seem “very expensive.” But in his opinion, the technology’s rapidly falling cost over recent years means, “wind is not only competitive, but it’s prepared to compete.” (Renew Economy; Motherboard)

India will impose anti-dumping duties on solar panels imported from the United States, China, Taiwan and Malaysia to protect domestic solar manufacturers, according to a government statement. The order, almost certain to anger India’s trading partners, sets duties of between 11 and 81 US cents per watt and comes after an investigation which started in 2011. The ruling by a quasi-judicial body has to be published by the Finance Ministry before it takes effect. The decision adds to India’s growing trade disputes just before Narendra Modi takes office as prime minister on Monday. “Imposition of anti-dumping measures would remove the unfair advantages gained by dumping practices,” said India’s Anti-Dumping Authority in its order released last week. Local manufacturers have long complained that U.S., Chinese and Malaysian companies enjoy state subsidies and are selling their products at artificially low prices to capture the Indian market. India also believes that anti-dumping duties imposed on Chinese solar producers by the European Union and the United States have further driven down the price of Chinese solar products, to the detriment of Indian suppliers. (Reuters)